Partygate Tory lies and criminality is off the scale 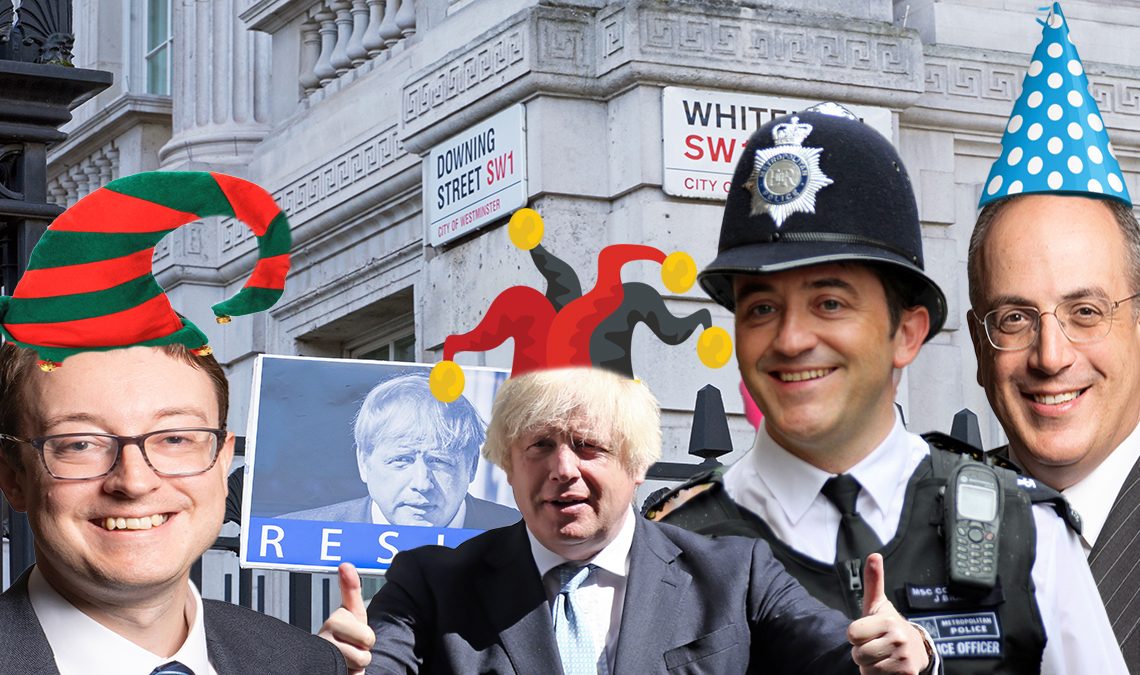 Partygate Tory deceit is finally coming to light in the mainstream media who had little choice for risk of blowing their own cover as the government’s propaganda machines they are. We take a look at the choreography of lies prevailing from the scandal ridden Tory kleptocracy who have defaced British constitutional principles established over hundreds of years. “Justice subject to status”.

Partygate Tory lies come not only from Number 10 Downing Street, the Prime Minister’s headquarters, but from throughout the Tory party. Dishonest concealment and cover ups prevail on an unprecedented scale. How unconstitutional and blatantly dishonest the UK’s governance has become.

Developed by Lord Nolan, the 7-principles of public life is the cornerstone ethical code of conduct that all ministers, judges and public officials (including police and regulatory authorities) must observe. The leadership altogether lack any inkling of integrity, it follows therefore that the rule of law and ethical standards are going to nosedive.

Leading by example the Tories have proven they have zero respect for the rule of law they are in office primarily to administer and advocate.

What’s worse, you have a Lord Chancellor in Dominic Raab, head of the justice system who swore to “respect the rule of law” consistently acting to defend the government’s lies and lawbreaking.

Just two days ago, on 22nd May 2022 the politically influenced tabloid, the Daily Mail published this:

“A ‘secret’ meeting between Boris Johnson and Sue Gray was requested by her and did not discuss her detailed findings about Partygate, Whitehall sources said last night”

On Friday 20th May 2022 it was publicly announced that Boris Johnson secretly met with Sue Gray to discuss the so called “independent report”. Downing Street immediately sought to defuse the situation stating that Miss Gray had herself requested the meeting.

On Saturday 21st May at 11AM Whitehall’s Gray inquiry announced denial that Sue Gray called on the meeting.

When asked about the meeting Minister and Chief Secretary to the Treasury Simon Clarke, the Tory Teesside MP, a locality mired with a deep history of police and political corruption, asset stripping and deceit said:

Less than two-hours later Number 10’s spokesperson denied Clarke had been misleading stating that “He said that the formal, technical meeting request came through from Sue Gray“.

Later in the day, pressure mounted and it was announced that in fact it was Number 10 who called on the meeting, with their spokesman stating it was:

Clarke went on to admit in no uncertain terms that:

“The meeting was “designed” to tackle some of the practical issues connected with publication of the report, including photographs and whether people can be named in the report”

Pictured on the right Clarke went on to contradict himself entirely of what he first admitted knowing that the aim of the meeting was to suppress evidence and to decide who can and cannot be exposed (unduly affecting the outcome):

“…totally independent of ur, any political, ur pressure, I, I”

Just days prior to the start of the formal police investigation which got underway on 25th January 2022 it was Number 10 officials who told staff members in attendance at the law breaking parties and gatherings whilst the rest of the UK was locked down to get rid of the evidence.

Two separate staff members at Number 10 told journalists that a senior aide told them it would be a “good idea” to remove any messages implying they had attended or were even aware of anything that could “look like a party”. One source, a staff member at Number 10 told the Independent that I was:

“told to clean up my phone just in case”

A second staff member confirmed that:

Partygate conspiracy to pervert the course of justice

The offence of Perverting the Course of Justice is committed when an accused:

Not only did the systemically corrupt Met Police pervert the course of justice themselves by preventing justice being served on Boris Johnson for 5 of 6 (at least) of the offences he is proven to have committed, but yet they concealed and evaded their duty in the public interest to investigate the substantive allegations that Number 10 senior aides perverted the course of justice just prior to the investigation getting under way. They are all in it together.

In the House of Commons on 8th December 2021 Labour’s Catherine West MP asked Johnson specifically whether there had been a party in Downing Street on November 13 2020. Johnson replied:

“No, but I am sure that whatever happened, the guidance was followed and the rules were followed at all times.”

Johnson replied “no” there was no party, knowing that there was and likewise knowing that on 5th November 2020 the second national lockdown was enforced.

It is proven beyond reasonable doubt on both counts that Johnson knew the representations he was making to Parliament on 8th December 2021 was blatantly false and therefore it is proven he knowingly misled Parliament.

Any Minister who knowingly misleads Parliament must hand in their resignation.

Met Police had all the pictures of the 13th November 2020 lockdown party, yet they acted under orders of the Tory corrupt establishment to prevent justice being served on Johnson knowing of the multiple offences he committed.

The Sue Gray meeting with Boris Johnson was, by Clarke’s own admission an attempt to adversely affect the outcome of the purportedly independent report commissioned during the course of a public justice investigation.

A civil investigation is likewise a course of public justice and it is proven beyond doubt that Johnson has perverted it.

“Not only did he breach electoral law he lied about it too. In May he told Lord Geidt that he did not know who was behind plans to refurbish the flat until Feb 2021 – but the Electoral Commission has said Boris Johnson contacted Lord Brownlow in November 2020 asking for more cash for the refurbishment. Boris Johnson lies as easily as he breathes”

Michael Ellis QC MP, the former Tory Solicitor General dishonestly concealed by refusing to say who the Downing Street person was who gave Boris Johnson an assurance that no rules were broken at the No 10 events. Likewise, also in December 2021, knowing of an imminent police investigation, Ellis lied stating Simon Case, the cabinet secretary, did not attend any of the parties.

Just earlier this month, Simon Case, head of the civil service was present at “more than one” of the events being investigated told friends that he “expects to be fined over Partygate“. The Tory crime family all cover for one another.

The people of what was once “Great Britain” deserve better than to be governed by a kleptocracy of cheating criminals who have weaponised the courts, making themselves immune from prosecution whilst everyone else is punished and whilst inflicting oppressive gross human rights violations against the people. They have defaced the rule of law.

We, the British people have the inalienable right to be governed justly under the rule of the laws of the United Kingdom. Under this vile kleptocracy, they have proven themselves incapable.

We shall be following up our police complaint of corruption today by presenting this article to Sir Steve House and asking him to comment personally. We shall include any comments in the next article in this sequel.

Worth reading...
Partygate turns Jailgate – Perverting the course of justice
error: Alert: All our content is protected - You are prohibited from copying !