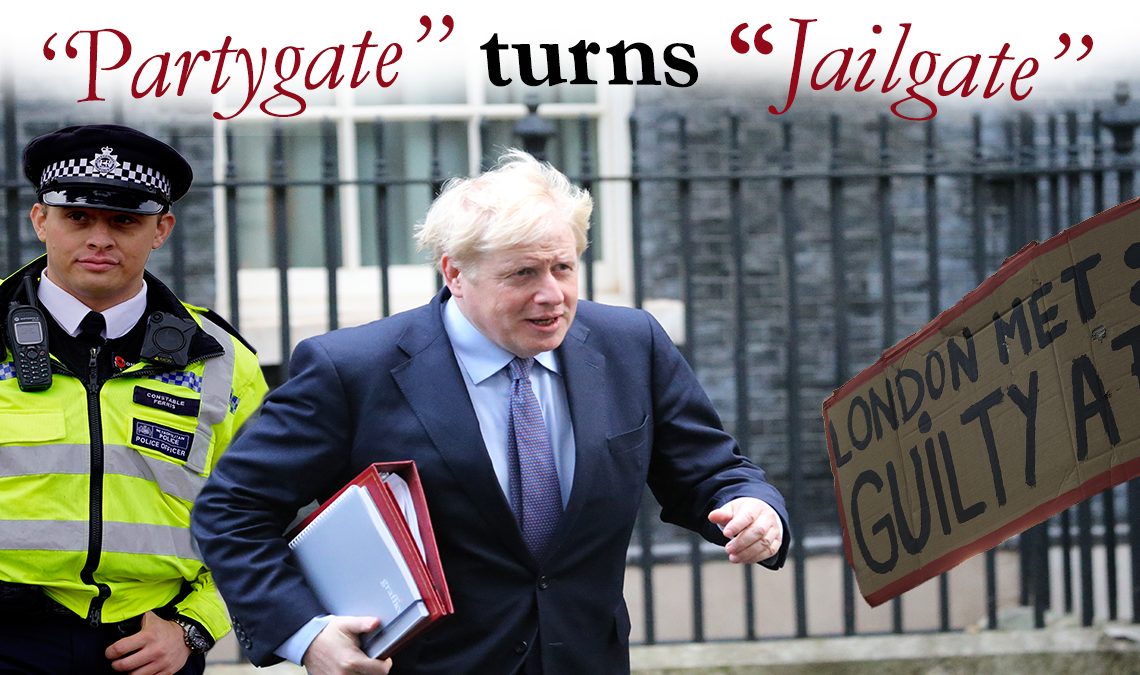 “Partygate” turns “Jailgate” with an aggravated conspiracy to pervert the course of justice by the Tory kleptocracy and their soldiers, the systemically corrupt Met Police. They are laughing at us, the people, at the expense of the public, the rule of law and the overwhelming public interest in prosecuting all responsible.

A culture of impunity, secrecy and lawlessness prevails

The lawless Tory establishment have instructed Met Police to prevent justice being served on Boris Johnson, that is a fact.

Huhne, Pryce and Briscoe were jailed over their fixed penalty notice evasion – Why are the Tories and their affiliates made above the law?

Back in 2014, Chris Huhne, the former Secretary of State for BEIS, his ex-wife, Vicky Pryce and Constance Briscoe, a recorder judge were all jailed for perverting the course of justice over Huhne’s driving points. The course of public justice had started when Huhne was served the driving point form.

The originating driving points offence in Huhne, Pryce Briscoe was subject to a fixed penalty notice with a maximum penalty of a fine and 3 driving points.

It matters not the severity of the originating offence where perverting the course of justice is concerned, what completes the offence is when someone acts in a way to prevent justice being served on an offender when a course of public justice has started.

If you get flashed by a speed camera once down the motorway, you receive the fixed penalty notice of a fine and 3 points on your license.

If you go further down the motorway and you get flashed again, you receive a further fixed penalty notice and 3 points on your license. In other words, the law provides that you get punished each time you commit the offence. That has not happened here.

Like the driving points offence in Huhne, Briscoe, Pryce, criminal breaches of the Coronavirus legislation are also only subject to a fixed penalty notice.

However, the fixed penalty notices for breach of the Coronavirus lockdown legislation doubles for each subsequent offence. Any breach at large gatherings of more than fifteen people is subject to an £800 fine on the first count, reduced to £400 if paid within 14-days.

It is likewise proven that Boris Johnson has only been punished for only one of the six offences he has committed, proving that Met Police, acting under orders of either Boris himself or members of his Tory kleptocracy, have conspired to pervert the course of justice.

Perverting the course of public justice is an indictable only offence, it must be tried exclusively in the Crown Court by judge and a jury panel. In conspiracy, when committed by corrupt public officials and police whilst abusing the public trust instilled in them, the offence is aggravated.

Boris Johnson, his then fiancée and 17 staff were pictured in attendance in breach of the regulations. At that time regulations permitted a meeting of only one other person from outside their household, and only as long as it was an outdoor public place. Two-metre social distancing must have been maintained. Level of fine: £400 if paid within 14-days or £800 thereafter.

Over 40 Downing Street staff attended the “bring your own booze” party during the first lockdown in breach of the regulations. Boris Johnson first sought to conceal the fact he attended, but then during the PM’s questions in Parliament on 12th January 2022 Johnson accepted that he did attend but that he thought it was a work event. Level of fine: £800 if paid within 14-days or £1600 thereafter.

Up to 30 revellers got together in the Cabinet Room at Number 10 to present the Prime Minister with his birthday cake. Johnson, his wife Carrie Symonds and Rishi Sunak all paid fixed penalty notices, yet those notices were only for £200 and not for the £400 prescribed by law. Why did they receive a £200 discount when anyone else would have been fined £400 if paid within 14-days or £800 thereafter? Level of fine: £1600 if paid within 14-days or £3,200 thereafter.

With localised reports of loud music sounds of a party coming from Johnson’s taxpayer sponsored flat at Number 11. When asked about it, Johnson’s former chief advisor at Number 10, Dominic Cummings claimed that there were additional parties in Johnson’s flat during lockdown. When questioned as to whether a party went ahead in his flat, Johnson lied and denied there was . The Sue Gray report mentioned a second event held the same day at Number 10 celebrating departure of Cummings. Level of fine: £3,200 if paid within 14-days or £6,400 thereafter.

During the second lockdown there was a leaving party for Johnson’s senior aide Cleo Watson. During the event Johnson commended on how crowded the room was, with between 40 – 50 in attendance. Level of fine: £6,400.

Boris Johnson has been made “above the law” cheating the taxpayer of no less than £18,800 in fines at minimum

He received just a £200 fine, a 50% discount on what anyone else would have been fined when the law commits the minimum fixed penalty notice as £400. The corrupt police and the Tories, whether Johnson himself or one of his aides, perverted the course of justice to ensure he evaded justice for the rest.

We are being conservative, for we know that in fact Boris Johnson attended more than just 6 events. Intelligence UK International investigates.

At a cost to the taxpayer of over £460,000 for the mooted police investigation and the cover up, what a dreadful abuse of the public trust, needless to say, outright corruption and criminality.

Johnson’s wife, Carry, was likewise at all of the same events, and is therefore subject to the same statutory minimum fine across those FPNs of £18,800 of they were paid within 14-days.

The Lord Chancellor, Dominic Raab who is sworn into office to ” respect the rule of law” condones law breaking on video

“Look, the police have investigated this, without fear or favour, I appreciate there’s been lots of speculation but that’s what the police have found. Ur, um, speaking from a government point of view I think it’s right and welcome that the Metropolitan Police have concluded their investigation” said Raab.

Raab went on to state “He’s already apologised, we take the issues very seriously, there’s been an overhaul of Number 10 since the interim Sue Gray report”

This is the Lord Chancellor responsible for the rule of law and justice in England and Wales implying that it’s fine to break the law, as long as one apologises. Is that respecting the rule of law?

What about perverting the course of justice? They all appear to be very good at that. Are they going to apologise, and before or after they complete their sentences?

The sentencing remarks in Huhne, Pryce Briscoe synergise perfectly in this case of impunity for the Tory kleptocracy

“If there is a common thread between you all, then, from the insights I have had into the character of the each of you during this case, I regret that it is one of arrogance by educated individuals who considered that respect for the law was for others”

“It must be clearly understood that it amounts to the serious criminal offence of doing acts tending and intended to pervert the course of justice and that, save in the most exceptional circumstances, an immediate custodial sentence must follow“.

A Number 10 spokesperson announced that “the Prime Minister commissioned the investigation led by Sue Gray and has been clear throughout that it should be completely independent”.

It was so independent that one of the defendants who commissioned the report met in private with the investigator when the course of public justice was in play to enquire as to whether incriminating photos would be published in the report.

Nobody is above the supremacy of the rule of law, Boris Johnson and all 12 of the Met Detectives tasked with the investigation, along with whomever else of their Tory kleptocracy were involved in the conspiracy must be arrested and returned to Court for onward trial in the Old Bailey for aggravated conspiracy to pervert the course of justice.

What were the police that were on guard 24/7 outside Number 10 & 11 Downing Street doing when all this was going on? Bodycam footage?

We have asked Boris Johnson, Number 10 and Dominic Raab to comment and we will publish any comments received in the next article in this sequel.

Worth reading...
Met Police corruption: concealing serious crime by corrupt judges
error: Alert: All our content is protected - You are prohibited from copying !