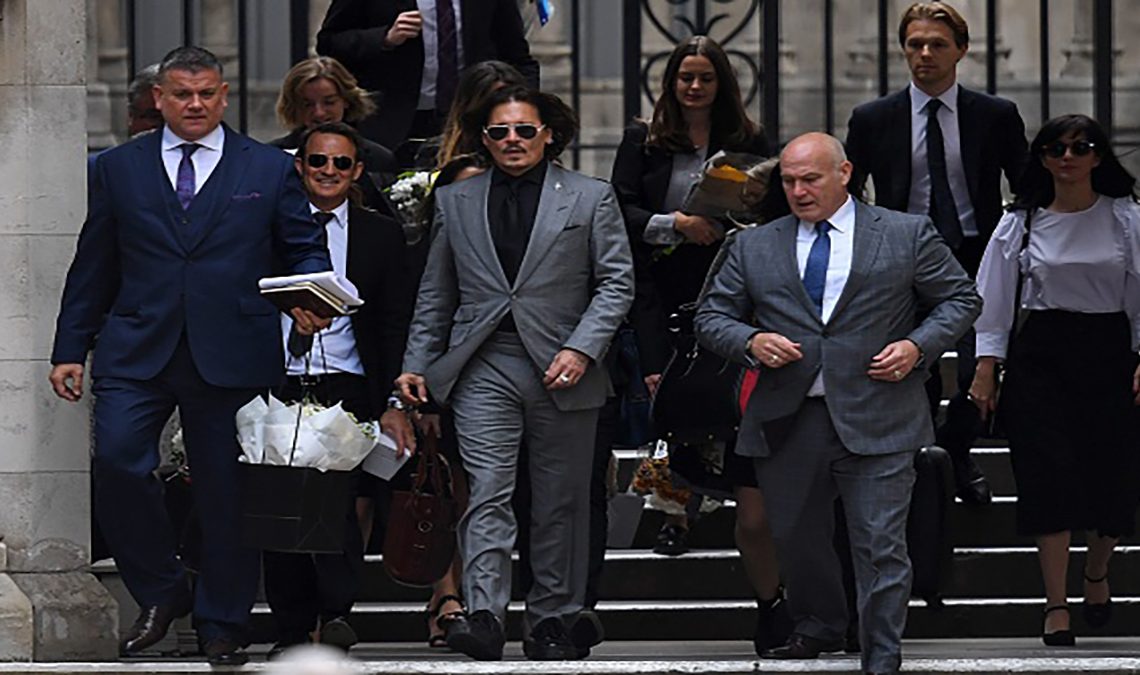 Intelligence UK was commissioned to investigate potential conflict of interest and judicial impropriety in the case of John Christopher Depp II v News Group Newspapers Ltd.  This is the introductory 1st part of our 8-part investigatory report into the case following our initial review of the transcripts of the proceedings, the written submissions, the application to adduce further evidence and the judgments.

Johnny Depp (“JD” and Amber Heard (“AH”) first got together on set during the 2011 filming of The Rum Diary. They married 4-years later, with the relationship unfortunately going south and ending after 18-months marriage during the second quarter of 2016.  In August 2016, they agreed a $7 million / £5.048 million divorce settlement.

Back in 2018, JD’s former wife and fellow actress AH took the media by a storm, alleging that JD had been violently abusive during their rocky 18-month marriage.  The Sun, in their usual mildly belligerent unceremonious style, labelled JD a “wife-beater”.  In our opinion, after review of the case documents, those were far out unsubstantiated and defamatory allegations.

Since the allegations came to light, in 2019 JD filed lawsuits for defamation against AH in the USA and The Sun’s publisher, News Group Newspapers Limited, originating in the High Court of Justice in London, with both sets of proceedings from JD citing that the claims are false and defamatory.

AH responded to the litigation by countersuing in the USA for $100 million / £71.72 million, alleging years of abuse by JD, described by AH as “the monster” in the extensive counterclaim filings.

It was alleged by AH and her supporters that during an alleged tussle on the evening of 21st May 2016, JD had thrown a phone at her face, trashing the kitchen in their penthouse apartment.

During the proceedings it was alleged by Rocky Pennington (“RP”), a close friend of AH, who did not actually witness the incident that “he just was hitting everything with the wine bottle, just smashing it all off. So, there was fruit on the floor and baskets and, you know, glass bottles and flowers”.

AH testified, stating “We have huge heavy silver candlesticks, candelabra sticks. Those were on the floor broken. Baskets of fruit that we had on the kitchen island”.

“Containers holding the spoons and forks, kitchen utensils, those were spilled”.

“He broke a lot of glass things that left glass on the floor.  When he walked out into the hallway, you could see wine spilled all over the ground and wine on the walls and, and so I knew that at least he had gone through there and was like sloshing wine anywhere”

“…broken candelabras, glass strewn on the floor and red wine sloshed on the walls and carpets”

Upon receipt of the 911 call, LAPD were at the scene within 15-minutes.  4 officers attended, with the first two clearly testifying after having searched the property for evidence that they witnessed no injury, damages or evidence of crime whatsoever.

“We met with the victim, we checked the location, the husband wasn’t there, and that the victim advised us she wasn’t going to give us further information”

During the trial in High Court, it was said by prominent advocate, Andrew Caldecott QC, for JD that Nicol J had “unfairly rejected evidence unfavorable to Heard”, citing that the Judge should have given more consideration to the importance of recordings evidencing that on the balance of probabilities AH had assaulted JD, where she was recorded saying “I can’t promise I won’t get physical again”.  It is our view that this admission was in fact only substantive evidence of an assault / domestic violence in the case between the former couple.

Andrew Caldecott QC, acting for JD submitted that the claim AH donated the entire amount of her $7-million divorce settlement to two charities was a “calculated and manipulative lie”, giving AH a considerable boost to her credibility that may have “tipped the scales against Mr. Depp from the very beginning”.

During the proceedings in Fairfax between JD and AH, now adjourned until 11th April 2022, when asked by JD’s attorney, Leo Presiado of the law firm Brown Rudnik LLP in Boston, if she remembered anything resembling the damage conveyed in AH photographic evidence during her search of the property, Saenz replied: “I did not”

Fresh evidence that has not been considered

The Daily Mail has obtained never-before-seen bodycam footage worn by two of the four officers attending the scene.  In the video footage, which you can watch for yourself below, the officers can be seen entering the home.  The property is in a clean and tidy state with no obvious signs of damage, broken items or wine spillage as alleged. There were no signs of personal injury, in contrast to the allegations.  The evidence does not deceive.

Officers Saenz and Hadden were at the scene within 15-minutes of receiving the 911 call, although they had no footage as their bodycam devices were still being phased in by the LAPD, both testified to state there was no evidence of any assault or any damage or spillage at the property.

The evidence from the bodycam footage was taken by the next two officers on the scene, who arrived within two-hours of the first 911 call. The never before seen footage ratifies the testimony of the LAPD officers Saenz and Hadden that the allegations and events alleged during the evening of 21st May 2016 are entirely spurious.

“I accept her evidence of the nature of the assaults he committed against her. They must have been terrifying. I accept that Mr. Depp put her in fear of her life” Nicol J stated.

JD repudiated the allegations and findings, citing that:

“The surreal judgment of the court in the U.K will not change my fight to tell the truth and I confirm that I plan to appeal.

“My resolve remains strong and I intended to prove that the allegations against me are false. My life and career will not be defined by this moment in time.”

JD was refused permission to appeal in the Court of Appeal in March 2021,with the Court of Appeal citing that the hearing before Nicol J was “full and fair” and that the Judge “gave thorough reasons for his conclusions which have not been shown even arguably to be vitiated by any error of approach or mistake of law”.

JD was also refused the right to adduce fresh evidence to prove his case, which, in our opinion, in itself, defies the right to a full and fair trial.  The fresh evidence needs to be adjudicated upon and in fact, pursuant to the Civil Procedure Rules “CPR” 3.1(7) fresh evidence that could make a material difference to the outcome of the judgment provides grounds from which to set aside that judgment and order a retrial of the issues.

“We accordingly refuse permission to appeal.”

In absence of trial based upon the fresh evidence adduced, it does not take a genius to determine that an injustice has been served.

Actual or perceived bias – Violation of the principles of natural justice

The second rule is known as audi alteram partem, meaning, hear the other side. The rule states that a decision cannot stand unless the person directly affected by it was given a fair opportunity both to state his case and to know and answer the other side’s case. See: (R v Chief Constable of North Wales Police, ex parte Evans [1982] 1 WLR 1155 (HL); R v Army Board of the Defence Council, ex parte Anderson [1992] QB 169; R v Secretary of State for the Home Department, ex parte Doody [1994] 1 AC 531 (HL).

The starting point in determination of any actual or perceived bias is the basis test being that the fair-minded and informed observer, having considered the facts, would conclude that there was a “real possibility” that the judge was biased (See: Porter v Magill).

In Miley v Friends Life Ltd, Turner J followed the approach set by Lord Neuberger in his paper delivered to the Singapore Panel on Judicial Ethics and Dilemmas on the Bench on 19 August 2016 which is displayed in the Supreme Court’s website; The Role of the Judge: Umpire in a contest, Seeker of the Truth or Something in Between?

Lord Neuberger cited that if a judge thinks a legal argument has not been raised by the parties, he should normally raise it himself, shortly and neutrally.

In the paper, page 2, paragraph 5, Lord Neuberger cited that:

This approach is emblematic of the common law system, sometimes characterised as accusatorial, with two (or sometimes more than two) parties battling it out like two football teams or two tennis players, and the judge acting as a disinterested, detached referee or umpire, only getting involved for two purposes

– (i) in order to resolve procedural disputes before or during the trial, and;

Note the emphasis is added “on the basis of an assessment of the evidence which has been adduced and the legal arguments which have been advanced”. Given that JD has been prevented from adducing fresh evidence that would seriously undermine the allegations central to the case, there is genuine concern from our end that the evasion of evidence and the general tendency to favour could indicate that the decision of both the inferior and superior court are void on the grounds of perceived bias. Evasion of one side’s and disallowance of one side to present evidence that has not been considered is indeed bias.

We were shown a line diagram suggesting that Mr Justice Nicol has personal connections linked to the case that were not disclosed:

Whilst JD acknowledged his drug problems, he denied any allegation of assault and accused AH of fabricating the allegations, insisting he was “not a violent person, especially with women”.

JD’s lawyers argued that the allegations have caused “serious harm” and “significant distress and embarrassment” to the actor, detrimentally impeding his hugely successful career.

Our next article will report further on our digging in relation to the line diagram, which could well prove there are motives more sinister, substantiating our initial thoughts that the orders may be void on the grounds that the judge should have recused due to perceived or actual bias.

It is our learned opinion that the real pirates behind the scenes are the compromised, controlled UK judges who have proven to have been getting up to all kinds of antics across a number of high profile cases we investigated.

Worth reading...
£850,000 pilfered with Paul Staines AKA Guido Fawkes perjury
error: Alert: All our content is protected - You are prohibited from copying !