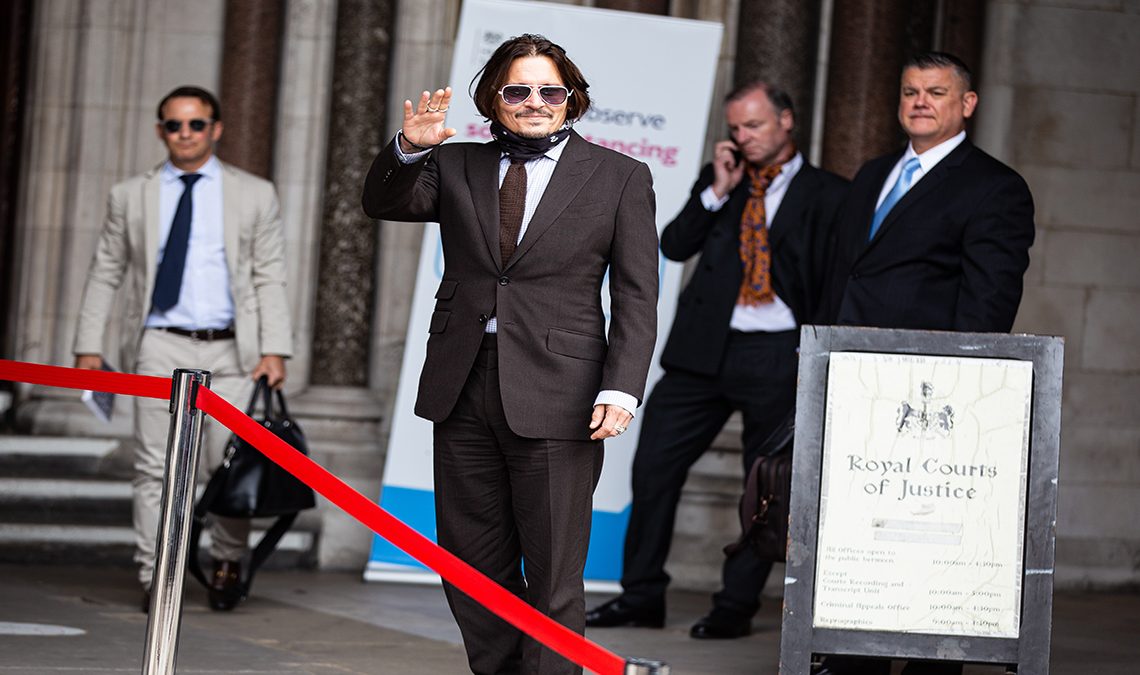 In our first article we concisely addressed the background to the case and the main allegations levelled against Johnny Depp (“JD”) by Amber Heard (“AH”), which gave rise to the defamatory allegation, wherein The Sun branded JD a “wife beater”, founding JD’s libel claim against its publisher News Group Newspapers Ltd. For anyone not familiar with the case, we suggest reading the first article, as this is the follow on.

We are focused on fresh evidence that was not adduced during proceedings. It is our finding herein that this evidence completely undermines the testimony of AH and her key witnesses, long term friend, Rocky Pennington and Joshua Drew as to the sequence of events during the alleged domestic violence incident on 21st May 2016. We also found the photographic evidence to be highly dubious.

A key AH witness in the 2019 JD v AH case in Virginia, Joshua Drew, testified to clearing up broken glass within 1 hour and 45 minutes of the first two officers arriving at the scene, before the next two turned up, but confirmed he did nothing to clean up the wine.

In Mr Drew’s witness statement dated 12th February 2020, page 4, paragraph 23, reading to paragraph 31 of page 6, the statement is inconsistent with the bodycam footage. At page 5, paragraph 27 it was stated that:

“Later, I greeted the police officers who arrived about 15 minutes later and showed them around the apartments. I showed them broken glass, walking past the large wine stain in the hallway. I showed them various damage to the property: a wine bottle dent in the door of our apartment (PH 1 ), then a tour of PH5 where there was broken picture frames, smashed glass and Rocky’s jewellery and other things strewn across the apartment. They acknowledged that something had clearly happened”.

The statement is inconsistent with that of the two domestic violence trained officers, Saenz and Hadden, who testified on three occasions that after conducting their sweep of the property, both confirmed that there was, effectually no evidence of any damage or personal injury whatsoever. Clearly, if there was broken glass and wine spilled all over the floor then those officers would have recorded it.

At page 6, paragraph 29 of his 12th February 2020 statement, Mr Drew stated that: “After this we cleaned up some of the broken glass in PH3 that was on the kitchen floor so the dogs wouldn’t be hurt. Other things, like piles of books strewn about, we left as it was“.

At paragraph 30, Mr Drew then confirmed he greeted the second set of officers who provided the bodycam footage.

AH’s testimony of the alleged incident was that: “He broke a lot of glass things that left glass on the floor. When he walked out into the hallway, you could see wine spilled all over the ground and wine on the walls and, and so I knew that at least he had gone through there and was like sloshing wine anywhere“.

Whilst Mr Drew testified that: “‘In the hallway, outside of the penthouse, was quite a bit of spilled wine. I don’t believe we dealt with that at all.’

The fresh evidence, the bodycam filming of the scene by the second set of officers in attendance paints an entirely different picture

From 46-seconds into the 3 minute 38-second bodycam footage there is a clear video recording of the scene from the lift through until outside the door of penthouse, with no evidence of any wine spilled whatsoever.

At 1 minute and 37-seconds into the recording, consistent with paragraph 30 of his statement, Mr Drew opens the door to the penthouse to greet the officers.

At 2 minutes 29- seconds into the recording, the Persian rug in the hallway has no obvious “large wine stain” as alleged by Mr Drew at paragraph 27 and no sign of any wine on the walls, as testified by AH.

At 2 minutes 46-seconds into the recording, a large wine bottle on the drinks trolley is clearly visible, along with three empty glasses, all of which are in tact and the glass trolley table appears clean.

From 2 minutes 30-seconds into the recording in the hallway on the right-hand side before entering the kitchen is a large silver candelabra that appears to be perfectly in tact.

All of the items that were alleged to have been smashed in the kitchen are visible on the centre isle, including the vase of flowers and a fruit bowl, with no signs of damage whatsoever.

Surely, if JD had gone on a bender and smashed the place up as alleged, the bottle alleged to have done the damage would not still be sitting on the clean drinks trolley.

On 17th July 2020 during trial Isaac Baruch, who lives next door to the couple confirmed he saw AH the day after the alleged incident and saw no mark on her face whatsoever. Mr Baruch said:

“I’m seeing all these phoney baloney pictures in People magazine, the Amish dress, these images, the whole narrative. But I saw her on Sunday, Monday, Tuesday and Wednesday without a mark“. “She wasn’t wearing a speck of makeup and there was nothing on her face. I was a foot away from her and there was nothing. I didn’t see a single bruise, redness, mark or red-tinted cellphone imprint. Nothing, not a thing.”

The picture featured in The Sun article published on 27th May 2016 when the allegation first surfaced is substantially different from that later used in the article of 22nd July 2020 where it is alleged there is “apparent bruising”, which was not evident at all. In fact, on examination of the image, we found there was no bruising or sign of injury whatsoever.

Perceived bias – A conflict of interest?

In our first article we alluded to potential links between Nicol J, the Publisher and those connected to AH. We found that Nicol J and his wife have a personal relationship with the Murdoch family, who own the tabloid. The Judge’s son, Robert Palmer works for TalkRadio, a sister company of The Sun owned by Rupert Murdoch.

We found an article written by Andrew Nicol from February 1982 when he was writing press articles as a practicing barrister.

After being exposed by Johnny Depp fans, Robert Palmer deleted the information relating to his post at TalkRadio from his Twitter account, seeking to conceal links to the mainstream media magnet, Murdoch and Newscorp, the ultimate beneficial owner of both TalkRadio and News group Newspapers Ltd.

It was Dan Wootton of The Sun, also a host of Talkradio’s drive time show and a close associate of Robert Palmer, who wrote the defamatory article to start with.

We conclude that there is no evidence of any injury to AH and our conclusion is consistent with that of the LAPD officer’s report at the scene as well as the testimony from Mr Baruch. Likewise, the fresh evidence in the bodycam footage provides incontrovertible evidence that the statements and eyewitness testimony by AH witnesses is far from credible, aligning also with the LAPD testimony that there was no evidence of either domestic violence or damage to the property.

It appears to us that in fact the photographs of the injuries may well have been fabricated. Our next article will examine the photographic evidence in detail.

There was no review whatsoever by the Court of the fresh evidence and to be afforded the right of a fair trial, the fact finding tribunal must fairly and diligently review both side’s evidence. From our own non-exhaustive review in this case so far, it’s clear that has never happened.

There is prima facie evidence from our investigation that AH and her witnesses have made knowingly false statements of truth and statements under oath that on the balance of probabilities they knew to be false. The Court has a duty, in the public interest, to further investigate this matter where such issues would amount to a contempt of court, punishable by up to two-years imprisonment.

Under 3.1(7) of the Civil Procedure Rules the Court has the power to vary, revoke or set aside an order if it is in the interests of justice to do so. In this case, it is our view that JD was ill-afforded the right to a fair trial on two grounds. Firstly, that fresh evidence is worthy of trial that completely undermines the case being advanced by the opposition but secondly, because there is a violation of both principles of natural justice. As alluded to in our first article, the decision is void, no matter how fair it may seem at first instance if any decision is made by any known bias that may have affected judicial impartiality. In this case, that perceived bias is most certainly too close for comfort.

In the multitude of cases we investigated, we have found that judicial impropriety in the UK is widespread. Political interference is a major issue and that the judges have been working to support the corporations, politicians and their affiliates. Is Johnny Depp another victim of the controlled, third party influenced judiciary? We have reason to believe so.

We will lobby and encourage the Attorney General to perform on his duty to investigate a possible contempt of court in making of false statements based on our findings. Next week we shall provide a detailed submission to the Attorney General’s Office asking them to intervene.