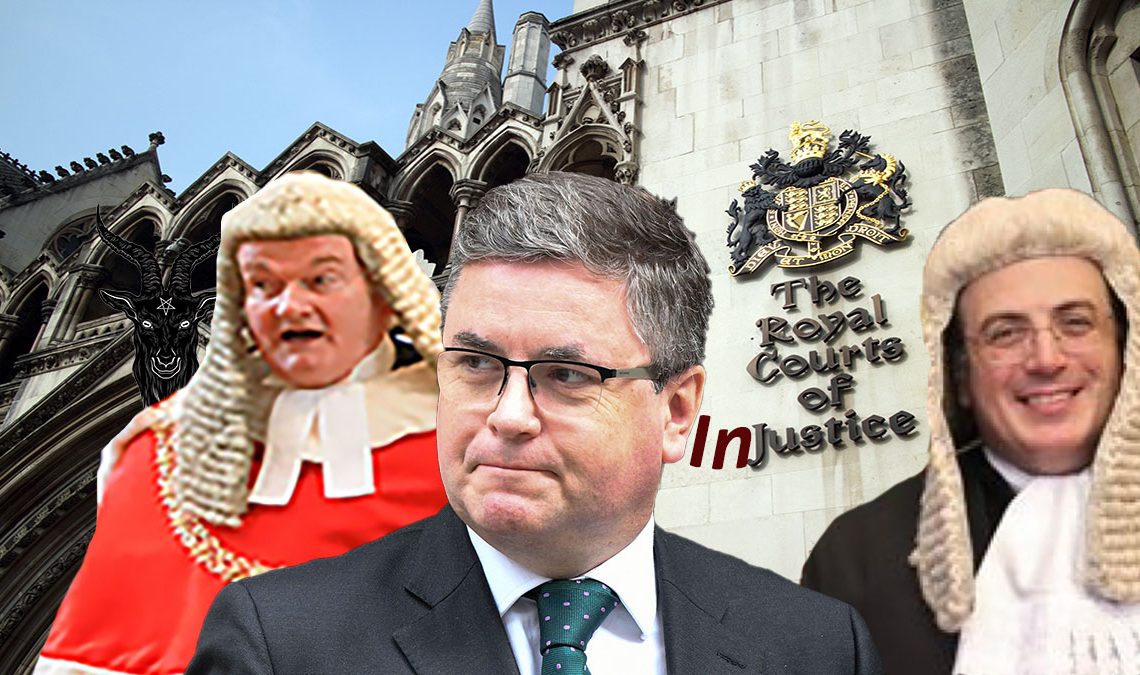 1.Intelligence UK International S.A, on behalf of the citizens of the United Kingdom, hereby presents this petition to the honourable Ladies and Gentlemen Members of the House of Commons and to our Lords and Ladyships of the House of Lords.

2. We petition you to restore the rule of law and to remove from office, the Lord Chancellor, the Lord Chief Justice, the Attorney General, Michael Tyrone Ellis QC and the judges named at page 3 who have been found to have breached their oaths.

3. We the people have the right to be governed justly, according to the laws of this Land. Under this Government that has not been happening, the leadership lack integrity and the Law Ministers have been breaching their duties under section 3(1) of the Constitutional Reform Act by wilfully failing to “uphold the continued independence of the judiciary”.

4. Both Houses of Parliament, the Commons and Lords have the power to join, advocate and convey our petition to The Monarch for the removal of judges of the High Court or the Court of Appeal.

5. This power originates in the 1701 Act of Settlement and is now contained in section 11(3) of the Senior Courts Act 1981.  We, the people have the constitutional right to petition The Queen when all else fails. This is a right of all civilians, exercised by petition to Parliament for an Order in Council to the Office of Privy Council, this is a right we hereby exercise.

The supremacy of the rule of law is our birthright

6. The birthright (privileges or possessions that a person has or is believed to be entitled to as soon as he is born) of Englishmen and women depends upon the supremacy of the rule of law, its observance and their right to control their laws.

7. The right to self-determination under the rule of our own law is the very fabric of the liberty of our society. The rules of law and custom that determine that we have as a “birthright” our liberty are all the prerequisite duty of office to uphold and maintain. This is sworn to be upheld by those taking up any office under the Crown.

8. The rule of law and our constitutional principles do not allow provision for diminishment or destruction. The Act of Settlement (12 & 13 Wi. 111. c.2) affirms that the laws of England are the birthright of the people thereof and all the kings and queens who shall ascend the throne of this realm ought to administer the Government of the same, according to said laws and all of their officers and ministers ought to serve them respectively according to the same.

A matter of utmost importance in the public interest

9. This Petition is a matter of national public interest and is of utmost importance to the constitutional independence of our judiciary. For the sake of our democracy our honourable Ladies and Gentlemen, Lords and Ladies must fulfil your duty to the best of your capability to protect our people and our future generations from tyranny and corruption.

The Constitutional Reform Act 2005 & the rule of law

11. Whilst definition of the rule of law is subject of much debate amongst lawyers, broadly it means; “an independent justice system, free from interference from outside, free from corruption, free from influence, that is respected and treated as independent by those in Government and those in Parliament and that ultimately, we respect the ability of the courts and the responsibility of the courts to take decisions according to their best judgment about what the law of the land requires”.

12. The fact that judicial independence is a core feature of the rule of law is not contested. Likewise, compliance with the law as it stands is a key element, ensuring a stable and predictable, rather than arbitrary, exercise of powers.  These two elements alone, however, comprise too narrow a definition. The rule of law goes beyond judicial independence and compliance with extant law, particularly as regards the Government which can, through Parliament, change the law.

13. The Lord Chancellor has an additional duty, expressed in the oath of office, to “defend” that independence, which includes preventing undue Government influence on judicial decisions, ensuring adequate resources for the judiciary to exercise their functions and having regard to the public interest.

14. The current Lord Chancellor has failed in that duty, for he has been the one, along with Michael Ellis QC MP, who has been coercing the judiciary.

I, Robert James Buckland, do swear that in the office of Lord High Chancellor of Great Britain I will respect the rule of law, defend the independence of the judiciary and discharge my duty to ensure the provision of resources for the efficient and effective support of the courts for which I am responsible. So help me God.”

15. The Lord Chancellor, Robert Buckland has been coercing the judiciary to provide impunity to fellow colluding corruptors disguised as lawyers, enshrined in secrecy and using the court as the means to defraud innocent parties of their rightful assets.

16. Buckland has defeated and disrespected the rule of law and the independence of the judiciary and for that he must be dismissed forthwith.  Both Houses have the power to dismiss Buckland from Office of Lord Chancellor.   We ask that this power be exercised.

“I, Geoffrey Charles Vos, do swear that I will well and truly serve our Sovereign Lady Queen Elizabeth 2nd in the office of High Court Judge, and I will do right to all manner of people after the laws and usages of this realm, without fear or favour, affection or illwill. So help me God.”

17. The constitutional principles in relation to judicial conduct and independence are firmly embedded in the Promissory Oaths Act 1868, which is law today. Law that is sworn to be upheld by all those taking up judicial office, as well as the Lord Chancellor.

18. The judicial oath is of paramount importance in protecting civilians from tyranny and in defending the constitutional principles that underpin any democratic state.

19. One must be able to rely on the courts and the judges within them to administer the law and justice impartially and independently, for without, no business or individual is safe.

20. All citizens must have confidence that cases will be decided fairly, according to law, but in the UK, the reality is, one cannot. There is urgent need for reform and this petition presents the long outstanding opportunity for both Houses of Parliament to do so.

21. The law that is designed to protect civilians from tyranny is being breached by those who are sworn to uphold the law fairly, independently and “without favour or ill-will”.

22. The judges have become a “law unto themselves”, wholly unregulated and unaccountable.

23. As if by design, there is no regulation nor enforcement of the law governing the proper and constitutional administration of justice by the judges themselves.  Judges that breach their oaths in the UK go completely unpunished.  The Judicial Conduct Investigations Office” (“JCIO”) does not deal with any allegation of bias, and its governors, the Lord Chancellor and Lord Chief Justice do nothing to regulate fellow members of their cabal save for providing them impunity.

24. The tyrants responsible for this abuse are immoral, dishonourable parasites, quislings and terrorists, representing and infestation of our justice system, sucking the life blood out of those who come to court to seek justice. They act as the “go to” judges to feed fellow parasites, unscrupulous lawyers who use the courts as “cash cows”.

25.The terrorists have “blood on their hands “, causing more deaths by suicide, family break ups, loss of business, homelessness and loss of quality of life than all the Islamic State terrorists on British soil combined.

26. The perpetrators are harbored by the political establishment, funded by the public purse, paid in excess of £120,000, per year, whilst they deliberately fail to do justice.

27. We are requesting that you provide us with audience to address the Houses accordingly with concise and irrefutable evidence to prove that the Lord Chancellor, Robert Buckland QC MP, the Lord Chief Justice, Ian Burnett of Maldon and 16r judges named below have acted with malicious intent to cause loss and to prevent justice being served on white-collar criminals.

The list of judges found to have breached their oaths

Help us to help you, please comment, like and share; Donate to our anti-corruption fund, taking direct action to restore the rule of law, targeting the perpetrators.