Systemic corruption and inter-agency collusion is rife in the UK 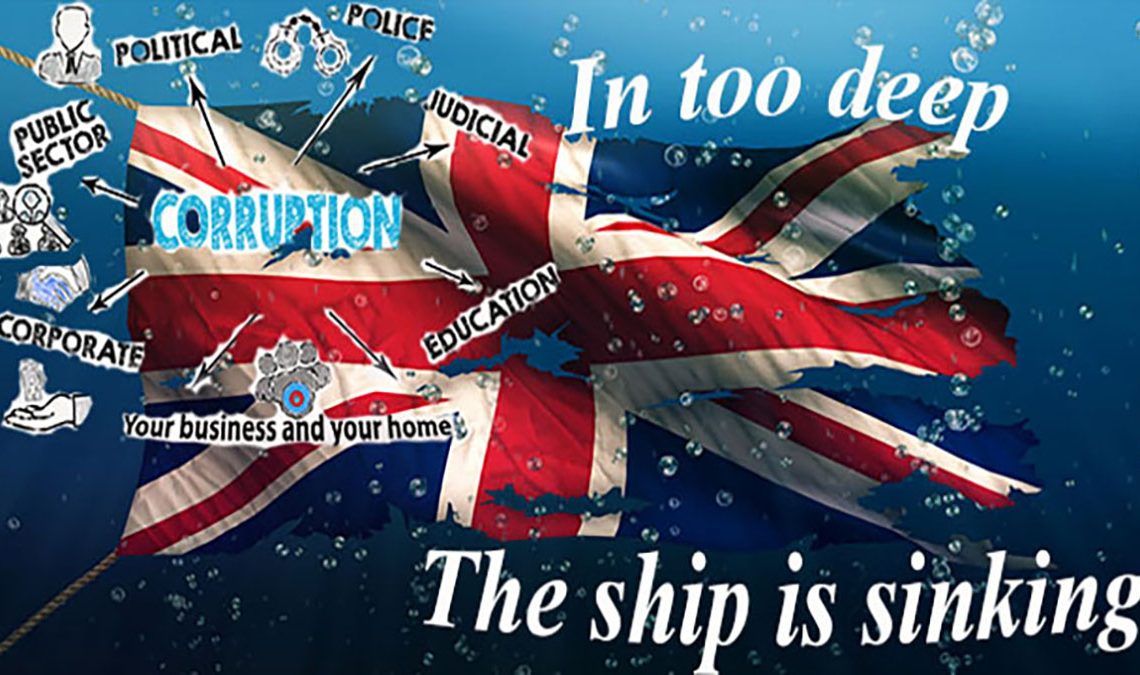 Unless you or someone you know has been affected, you may not even know that the UK is systemically corrupt, some may not even know what we are talking about when we refer to the phrase. What we are referring to is endemic and culturally accepted dishonesty, fraud, out of control civil servants and corrupt practices rife throughout the police, the Attorney General’s Office, the Serious Fraud Office, the Ministry of Justice, HMCTS, the judiciary and the courts themselves through to the Law Society, BEIS and the Insolvency Service, Parliament, all the regulatory authorities and the government quango offshoots.

What we have in the UK is a combination of systemic and grand corruption originating at the highest level in government right the way through the system of our public authorities driven by those at the top of the food chain. Dishonest concealment, monopolistic powers, a culture of impunity for members of their cabal, including lawyers, public officials and judges has become the norm.

A culture of corruption prevails

Corruption entails abuse of powers entrusted in a public official for private gain, whether that gain is for the corruptor or an associate. That trait runs hand in glove with an infestation of public authorities and affiliated private institutions with parasitical elements, a distributed network of corruptors who are generally pathologically dishonest, each fulfilling different roles in political and ministerial posts and throughout all public authorities, following common purpose practices and general rules of secrecy.

Abidance and compliance by the rules are rewarded and non-compliance, such as whistle blowing or acting lawfully is penalised. The culture of systemic corruption is complex and involves shared expectations, internalised management, codes of conduct, strategy and procedures to protect the collective organisational structure and its activities from exposure.

In essence, what we have in the UK is a taxpayer sponsored criminal racketeering enterprise. Our justice system and public authorities have been widely infiltrated. The organised system and distribution of members of the racketeering network is active in protecting all its members, shielding the racketeers from exposure, protecting them from prosecution and punishment.

Collusion and communication between members enable that strategy is deployed in individual cases throughout those authorities to ensure that the core desired outcome is achieved.

Perversion of the course of justice, concealment of fraud and other acts of corruption is the common goal. The conduct is endemic across the nation’s police forces, the courts and judiciary and the regulatory authorities, the Solicitors Regulation Authority, the Financial Conduct Authority, the Bar Standards Board in particular.

– The courts don’t do justice

To begin to tackle the problem, one must first gain knowledge of the mechanics, the inner workings of the systemic corruption, the key players and the methods used.

It is a problem that cannot be tackled by the same compromised system, we must do it privately and independently. Doing so was the basis of founding Intelligence UK’s covert intelligence group, dedicated to exposing and prosecuting perpetrators of domestic corruption.

– Aims to expose the inner workings and the perpetrators, where the controlled media fail to do so.

-Has the expert knowledge, highly sophisticated technologies and the skillsets to do so.

-Acts independently, in the interests of justice and in the public interest

A shotgun is dangerous in the wrong hands – So is freemasonry

Freemasonry is a system of morality, veiled in allegory and illustrated by symbols and numbers, a course of moral instruction utilising both allegories and symbols to teach its lessons.

It is not freemasonry itself that is the problem, but it is the culture it instills and the tools of masonic craft which are, unfortunately, used for illicit purpose. Freemasonry is, in our learned opinion, at the heart of systemic corruption, it is a main tool of the trade.

The legal profession is enshrined in freemasonry

The vast majority of lawyers and senior police do not join for social and personal development, they join because they want to utilise tools of the craft and the network of fellow members to transact and to further the aims of the racketeering enterprise.

Contrary to the purpose of freemasonry and rules of the lodge, covert business is transacted amongst members and the lodges themselves, enshrined in secrecy, make the ideal environment for members to communicate their illicit business in complete secrecy, as do the Inns of the courts.

Masonic influence is utilised widely in the legal profession to gain preferential treatment and the culture of the brotherhood conflicts precisely with the principle of natural justice and impartiality.

Freemasons support one another, that is a founding principle, the principle means that a freemason will get preferential treatment in a proceeding or business transaction over a non-freemason, creating a position of natural bias, favour over one’s opposition. Tools of the craft are used to communicate an illicit transaction during proceedings, we have witnessed this first-hand in the High Court of Justice and in Crown Court and magistrates proceedings.

The Law Society is one of the most masonic institutions in the world. Lawyers are all actively encouraged to become freemasons. In the middle of the 12th century, the military Order of the Knights Templar built the round church by the Thames which became known as the Temple Church. After the abolition of the Order in 1312, lawyers then occupied the Temple site and buildings, they formed themselves into two societies, the Inner Temple and Middle Temple.The entire legal profession in the UK was effectively founded upon freemasonry.

The 4 Inns of the Court, Gray’s Inn, Middle Temple, Lincoln’s Inn and the Inner Temple are enshrined in historic masonic culture. The names of the Inns themselves derive from the Knights Templar who had been in possession of the Temple site for over 150 years prior to the building first being occupied by lawyers.

Each Inn has an array of social opulence, libraries, dining halls and the historic places of prayer and the Inns are owned by their Honourable Society, governed by senior members of the Inn, the barristers and judges, known as Benchers. The Benchers decide who will be called to the Bar and who won’t.

The Bar has their own masonic lodges and is in its own right, as with the Law Society, they are masonic strongholds. Gray’s Inn Lodge, (Number: 4938) is a Royal Arch Chapter of freemasons who regularly meet at Freemason’s Hall. The Chancery Bar Lodge (Number: 2456) was established in 1892 and its membership are exclusively judges and barristers of the Chancery High Court of Justice in London, regularly meeting at Lincoln’s Inn Hall. Freemasonry originated the legal profession in the UK and today its practices run throughout its core.

Political interference with the judiciary and police

It cannot be overstated that the orchestrators of the UK’s systemic corruption issue are the ministers and politicians at the top of the food chain.

We have incontrovertible evidence that the Lord Chief Justice, Ian Burnett of Maldon and Robert Buckland QC have been promoting judges for their acts of corruption and malfeasance. They have been rewarding judges for executing their orders in various high profile cases we have been involved in.

It is those at the very top of the legal profession and the heads of state who are at the top of the network of taxpayer sponsored criminal racketeers, they are the taxpayer sponsored state terrorists. They provide the orders for the next in command to execute, that is the basic structure of their enterprise and they do so, hiding behind the façade of justice to inflict their atrocities on innocent civilians against the public interest. Bribery in one form or the other must be their only motive, whilst the motive of those receiving the orders are perks of promotion and pay rises, also clearly financial motivation.

There is a cure for corruption and that is transparency – In the UK, it is diminished

Decreased transparency, failures in duty of the press to act impartially and our controlled media is a major driver of systemic corruption. The UK’s press is vastly compromised and controlled and simply fail to publish the correct factual circumstances, deceiving the public into belief that the government and its offshoots are whiter than white when factually, they are darker than dark.

Freedom of journalists within the main press institutions to publish articles that may expose the UK’s darker side is substantively restricted, institutionalised collusion meets in the middle with systemic corruption and those at the top of the media corporations work in cahoots with the corruptors of government, killing the transparency that should exist.

Dissemination of factual information of national public interest through independent media is under attack and has been for a number of years in the UK. This Conservative government, although when Labour were in power the problem was nearly as bad (we do not favour, there is rot on both sides of the fence), our elected leaders, our MPs that represent their constituents should be standing for the people as a whole and defending freedom of the press.

Instead, attempts have been made to silence the media and to favour media institutions that dish out coverage favorable to the message the government wants to convey. The general trend is a global problem linked to a decline in the principles of open democracy as a whole, a major contributor of corruption and a breakdown of both democratic principles and the principles of open justice.

Help us to help you

Help us by spreading our news far and wide, informing your friends and family and by staying in touch with us as we continue in our quest to restore the rule of law and tackle the perpetrators.

Worth reading...
UK judicial misconduct and corruption is out of control and the judiciary are unregulated and unaccountable
error: Alert: All our content is protected - You are prohibited from copying !