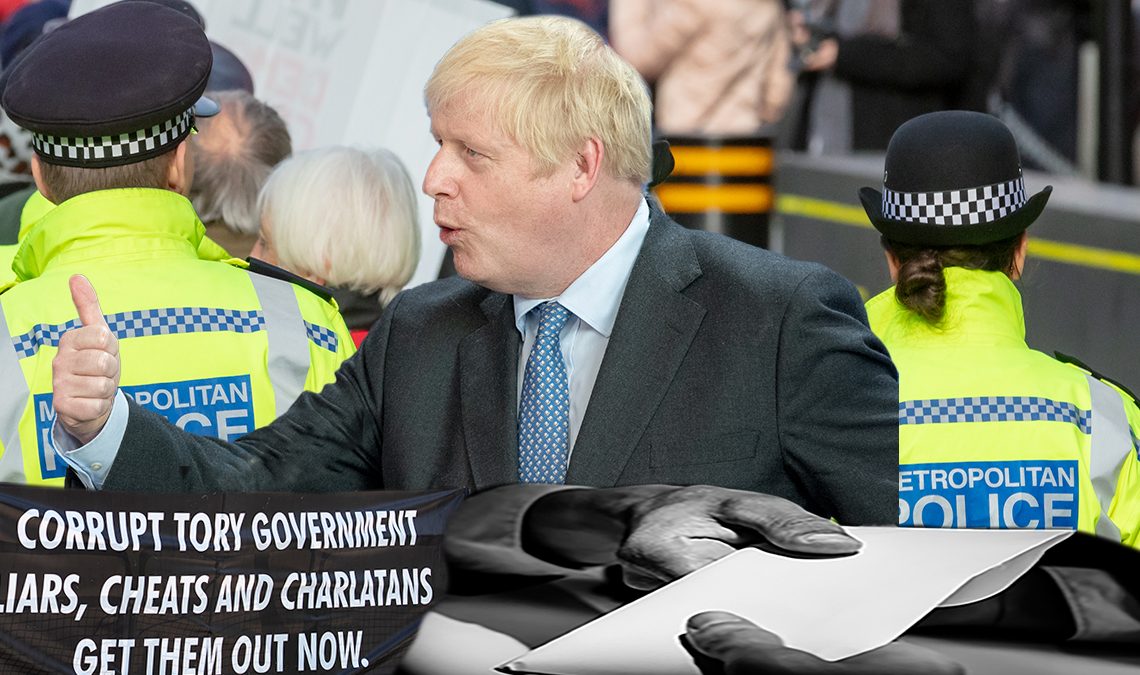 Despite being at six of the 12 rule breaking social gatherings probed by the Met, with 8 being found to have breached the law, yesterday Met Police announced termination of the investigation and that Boris Johnson would not be receiving any further fines. Others at the gatherings were fined, yet Johnson evades justice. Is that how it works?

In response to the Covid pandemic, a UK-wide lockdown began on 23 March 2020 with an explicit stay-at-home order that prohibiting all non-essential travel and social gatherings.

The course of public justice commenced in February 2022 when the failed Commissioner, Cressida Dick announced the launch of Operation Hillman with the Met police investigation into the “Partygate” Covid regulations breaches at Number 10.

At a cost to the taxpayer of over £460,000 in an investigation that lasted nearly four months that two decent private investigators could complete in half the time, the end result is a cover up by the systemically corrupt Met Police who prevented justice being served on the PM for risk of upsetting the political climate and bringing more shame on the Tory kleptocracy, mired in corruption, cronyism and scandals.

The effect on the public confidence in the administration of law enforcement, governance and justice should be and rightfully is going to be, absolutely non existent.

Yesterday, No 10’s official spokesman said “The Met has confirmed that they are taking no further action with regards to the Prime Minister.”

A case of logic before law, after all, the right to self-determination under the rule of law is the very fabric of our democratic society. Every adult knows right from wrong, and Johnson’s Tory party invented the laws they broke, they knew what they were doing was dishonest.

Johnson was at six of the social gatherings when the restriction on social gatherings were in force, therefore it is proven that Johnson has committed the offences on further counts and that he was provided impunity for that offending when the course of public justice started.

A clear and obvious abuse of the public trust. The people are policed by consent, but these corrupt, politically controlled police have made criminal justice “subject to status”, one law does not fit all. Why are the public paying for them when they have failed us?

The course of public justice started in February 2022 and those officers involved have prevented justice being served on Johnson, providing him impunity. Essentially, they have perverted the course of justice.

A police investigation is a course of public justice and they have made justice “selective” acting under Johnson’s orders, whether directly or otherwise, to prevent justice being served on him and undoubtedly fellow ministers of his party who were likewise at the event.

The cost to the public purse for the mooted investigation is one thing, but the true cost to the administration of justice has wide ranging implications, destroying what little trust the public have in either the police or the corrupt establishment they work for.

In Re Downes for Judicial Review [2006] NIQB 79 Mr Justice Girvan sitting in the Queen’s Bench Division Northern Ireland observed that:

“Public authorities have a duty to ensure that the court can fulfil its functions properly. For this reason irregularities that affect its process should be properly investigated in a manner that can allay public concern and the concern of the court to ensure that its process is not abused. Any possible attempted interference with or obstruction of the course of justice is a grave matter which demands a proper investigation“

Intelligence UK International has today launched an independent investigation into this cover up by Met Police. It is our belief that the instruction to cover up came under instruction from those at the top of the political kleptocracy, if not by Johnson himself, by one of his comrades.

These Tory law breakers have defeated the rule of law, making themselves above it for too long whilst everyone else is punished. The Covid rule breaking is just the tip if the iceberg, yet the controlled mainstream media are paid by them to conceal the truth from the public, this is where we come in.

Truth, justice and law must prevail. We shall publish our findings and may take further action by instigating a private criminal prosecution against the perpetrators.

Judgment against a Judge - HHJ Watkins is ruled against

Worth reading...
UK Human Rights Act reform and why we object