Abolition of UK human rights under the guise of reform 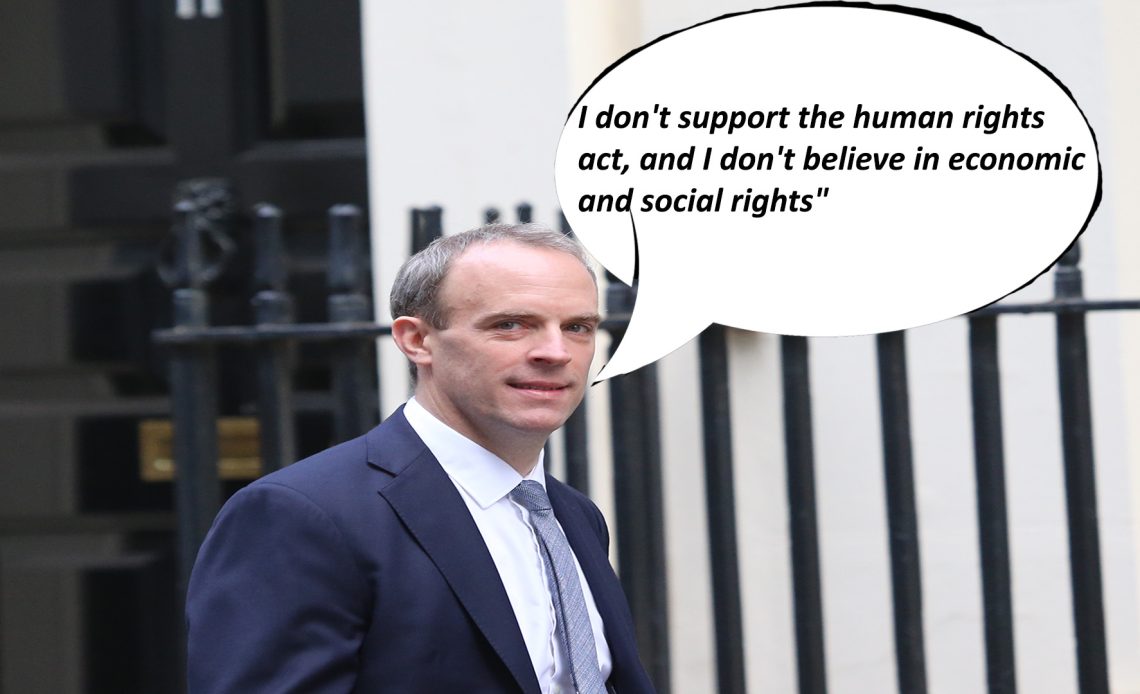 The Tory establishment and in particular Dominic Raab, the Lord Chancellor take issue with human rights. Rabb, who has not been in office 5-months and was sworn in to “respect the rule of law”, to “defend the independence of the judiciary” and to act at all times in the public interest wants to prevent the European Court of Human Rights from being the court of last resort for victims of human rights abuse by the UK State. Is that acting in the public interest and respecting the rule of law? UK human rights act.

MPs across all parties have warned that the “authoritarian” proposals will weaken protection of human rights for UK citizens, yet the plans motor ahead, hovering just below the public radar. Changes to UK human rights act.

In 2009 Raab was filmed admitting “I don’t support the human rights act, and I don’t believe in economic and social rights”. This is the man who has been installed by serial rule breaker, Johnson and his brethren, to tear up the human rights of the people and guess what, nobody is doing anything about it.

Human rights are supposed to be universal. The Universal Declaration of Human Rights was proclaimed by the United Nations General Assembly in Paris on 10 December 1948, setting out fundamental human rights to be universally protected.

The UK has an obligation in international law under the Treaty to ensure that the Articles of the Declaration are not violated. It was for this reason, fundamentally, that the UK brought in the Human Rights Act, the UK’s version of the European Convention on Human Rights, carrying over those fundamental convention rights into UK statutory law.

No one shall be subjected to torture or to cruel, inhuman or degrading treatment or punishment.

ARTICLE 5 OF THE UNIVERSAL DECLARATION

Everyone has the right to recognition everywhere as a person before the law.

ARTICLE 6 OF THE UNIVERSAL DECLARATION

ARTICLE 7 OF THE UNIVERSAL DECLARATION

Everyone has the right to an effective remedy by the competent national tribunals for acts violating the fundamental rights granted him by the constitution or by law.

ARTICLE 8 OF THE UNIVERSAL DECLARATION

Under this Tory kleptocracy, the rule of law is being eroded and fundamentally, the right of one’s access to a fair and impartial tribunal and right to a fair trial is being grossly compromised by the Tories themselves. The people are no longer equal before the law, it’s one rule for them and their brethren and a different set for everyone else.

Raab, and his predecessor, Buckland, in office of Lord Chancellor are sworn to maintain the independence of the judiciary, yet in December 2020, even the Lord Chief Justice was forced to admit that there is “unprecedented levels of political interference with courts“.

All the Law Ministers are under a legal duty conferred in section 3(1) of the Constitutional Reform Act 2005 to “maintain the continued independence of the judiciary”, it is self-evident, by the Lord Chief Justice’s own admission, that they have failed, they have broken the law and failed the people. Since then, it has become a whole lot worse.

The State is in breach of its duties under the Universal treaty and now they want to do away with the fundamental rights which provide remedy by the Court of competent jurisdiction for such violations. It is a disgraceful attack on civilians rights, freedoms and the rule of law itself.

Article 6 of the Human Rights Act 1998 protects one’s right to a fair and impartial trial, ringfencing articles 7, 8 and 9 of the Universal Declaration.

Essentially, the proposed overhaul is because Raab and his klepotcracy, who are abundantly aware that judicial independence is vastly compromised, wants to ensure that human rights are fettered and that the politically controlled English courts have the final say over such wide ranging human rights issues. A flagrant outright assault on the rights of the people.

Is it in the public interest to prevent the European Court of Human Rights, a court of international standing, independent of the corrupt UK state to be the court of last resort for victims of such oppressive human rights abuse? The answer is self-revealing. Why therefore are we, the people, allowing our rights to be violated by these tyrants?

The level of secretary, lies, corruption and concealment by this Government is off the scale.

It is now time for the people to act. Take this article to your MP, email it to them and demand that they act on behalf of their constituents to strongly oppose and resist to ensure that the rights of the people are maintained and that the UK retains the Human Rights Act 1998 without amendment whatsoever. Bring it to their attention that Raab, who is sworn into office to “respect the rule of law”, is doing precisely the opposite.

Who needs a Lord Chancellor who has breached his oath? It is time for these tyrants to go. They lack integrity, so all they lead has nosedived too far southwards.