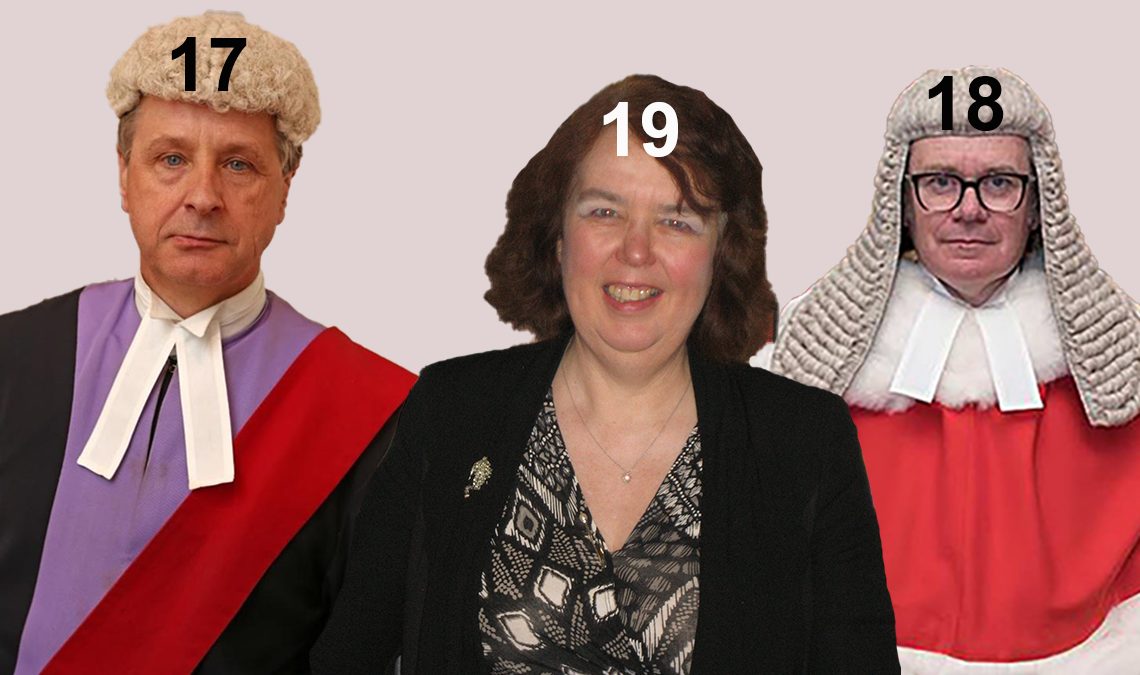 HHJ Prince, AKA Christopher John Prince of Newcastle Crown Court and Mr Justice Jonathan Swift, the oath breaking “go to” judge for the corrupt political establishment installed as judge in charge of the Administrative Court join the judicial hall of shame, along with Lady Justice Geraldine Andrews. HHJ Prince.

The Judicial Hall of Shame exists to expose and hold to account corrupt UK judges for unethical, abhorrent, unconstitutional behaviour. These oath breaking criminal offenders have been acting with favour and ill-will to prevent corrupt freemason lawyers from being prosecuted. HHJ Prince.

Paid by you, the taxpayer to administer the laws of the United Kingdom without fear, favour, affection or ill-will, sworn under oath to do the same, they, like the rest already added to our judicial hall of shame, have been working under instruction of the corrupt Tory establishment to prevent fellow Tory criminals and their supporters from being prosecuted.

They use the courts as “cash cows” to feed fellow freemason lawyers whilst degrading the rule of law, abusing their positions and terrorising innocent victims who come to the courts to seek justice. HHJ Prince.

Today we have added these criminal offenders, Mr Justice Jonathan Swift, the former chief counsel to the Treasury, Lady Justice Geraldine Andrews, who worked to assist Swift in perverting the course of justice and HHJ Christopher John Prince to our petition pursuant to section 11(2) of the Senior Courts Act 1981.

We are lobbying the new Lord Chancellor, Dominic Raab MP, Parliament and the House of Lords to remove all 19 corrupt judges from judicial office by petitioning the Monarch to exercise her powers under the Royal Prerogative to make an Order in Council to expel these oath breaking, lawless state terrorists from the judiciary.

It is proven beyond doubt that each and all of them have breached their oaths, yet under Boris Johnson’s vile kleptocracy, they remain in office, free to continue defrauding innocent parties behind the façade of law and in the name of “justice”. Their presence in the courts is the primary reason nobody is getting justice.

The Promissory Oaths Act of 1868 is law today, it is law that is designed to protect civilians from tyranny by those occupying judicial office. The problem is, that in the UK, the law is not enforced and corrupt members of the judiciary are completely unregulated and unaccountable.

The rule of law determines that all the judges we have added to the judicial hall of shame have breached their oaths, acting unlawfully to prevent justice being served whilst concealing offences, or otherwise acting with favour and ill-will, have no jurisdiction to continue being judges. They are fraudulent.

If you, or anyone you know, face going before any of the criminal offenders and traitors to Queen and Country that we have listed in our judicial hall of shame, just remember, they have no authority, they have no jurisdiction whatsoever and any order they make is void as ultra vires.

It is beyond their powers to continue purporting to be a judge after they have breached their oaths.

Intelligence UK International has carefully investigated each case, concerning each judge and it is proven to a high standard that each of the judges we name, have done precisely that.

Those interested in this article may also like the historical foundational and all time constitutional importance of the judicial oath.