Mr Justice Marcus Smith defrauds in the name of justice 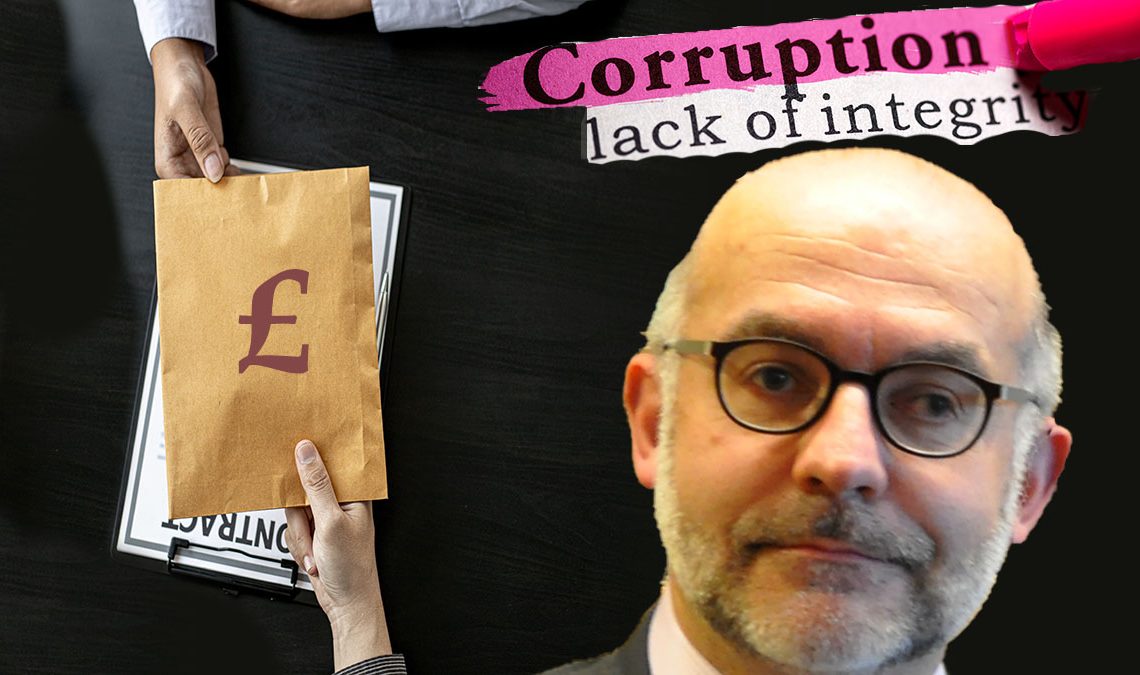 Mr Justice Marcus Smith is a particularly vindictive and immoral parasite, feeding off taxpayer’s funds whilst acting with malicious intent to defraud innocent parties of their assets, assisting white-collar criminal insolvency practitioners in furthering their fraudulent abuse through the courts.

We asked Smith to comment on our last article, but in typical common purpose style, he “goes into hiding”. These cowardly oath breaking criminals purporting to be judges defraud and then ignore, pretending nothing has happened whilst they continue leaching off the public’s purse, drawing hundreds of thousands in salaries each year when they have abused the public’s trust and have no standing to continue presiding over cases.

The Lord Chief Justice, Ian Burnett of Maldon and the Lord Chancellor keep them in office, so they can continue defrauding innocent civilians. This is what an absolute cesspool of corruption the UK justice system is. It is governed by tyrants who actively conceal this conduct so that fellow racketeers can continue using the courts to defraud.

The likes of Mr Justice Marcus Smith and many others only too freely engage in this kind of abuse, feeding the perpetrators off the fruits of their frauds whilst depriving their victims of the right to remedy for their wrongdoings.

If you are faced with a hearing before Mr Justice Marcus Smith, just remember, judges who breach their oaths, are not judges, he has no standing to preside over your case and on the balance of probabilities, if you allow him to, he will favour the corporation of the corrupt magic circle law firm and defraud you in the same way of your right of access to justice. Don’t stand for it, we the British people have the right to be governed justly. Smith is not a judge, he has no jurisdiction.

In our last article, Lloyds Banking Group a very dark horse indeed, we explained how Mr Justice Marcus Smith has been working for the criminal banking cartel. Smith is indeed that “dark horse” we referred to, the “lesser-known entity that emerges to prominence in a situation”.

Intelligence UK has petitioned against Smith, along with 15 of his cronies, fellow oath breaking criminals purporting to be judges, to be struck off and sanctioned under the Magnitsky Act for oppressive gross human rights violations in the name of justice. Their assets shall be sequestrated, just as they have done to so many innocent civilians.

Mr Justice Marcus Smith, acting with premeditated dishonest and malicious intent, has been providing impunity to Lloyds Banking Group for the fraud it has committed, ruining hundreds of lives, tearing families apart, causing innocent civilians to lose all hope and commit suicide.

The ones brave enough to seek justice in the rotten UK justice system that favours corrupt law firms and corporations are faced with the likes of Smith and fellow white-collar criminals, who ” call white black, when it is already proven to be white”. That’s precisely what Smith did in the Watson’s case, then, once he finished defrauding, following the typical corrupt practice, he invents an ECRO (extended civil restraint order) to deprive the Watsons of their right of access to justice, certifying the proven case as “totally without merit”.

The corrupt UK judiciary provide themselves false jurisdiction to make the civil restraint order, and then by allocating either themselves or one of their fellow racketeers to it, they constantly refuse permission to bring any applications under it, falsely labeling their victims “vexatious litigants” for trying to get justice for wrongdoings. This is how all too many of these human rights abusing politically controlled terrorists purporting to be judges in the UK operate.

There are two incontrovertible positions in the case that are already proven beyond doubt. A schoolkid could determine the case, but Mr Justice Marcus Smith has shown his true colours.

The property is legally and beneficially owned by a third party:

Mr Justice Marcus Smith was shown a registered Bare Trust Deed that was formulated on 1997. The Watsons were holding the property in question in trust for their daughter and in 2008, on her 18th Birthday, the title to the property transferred absolutely to her. The dark horse and its corrupt lawyers, Eversheds and, later, the purported trustees, the two white-collar criminals, David Standish and Blair Nimmo of KPMG, have known, since 2012, the property in question is owned by a third party. That did not stop them.

It did not stop them, because, undoubtedly, they knew that fellow criminal racketeers would continue in their quest to prevent justice being served, starting with Judge Martin Dancey of Bournemouth County Court and then others in the higher court who “jumped on the bandwagon” to present more layers of protection and high hurdles for the dark horse’s adversaries to jump over.

In his mala fide corrupt order of 13th November 2020, Mr Justice Marcus Smith altogether ignored every single part of the Watson’s application to rescind the bankruptcy orders that are in any event void ab initio (they cease to exist from the outset), because everything he was doing was already predetermined.

These criminals are in judicial office only to assist fellow racketeers in using the courts as cash cows whilst concealing fraud, (perverting the course of justice) and terrorizing their victims who are first duped into the belief that there may actually be some justice.

Smith failed in every way possible, but what really shows the mark of the treacherous deceitful parasite is the fact he undermined such an obviously straight forward position. Nobody in their right mind could possibly condone it, but Smith did. Smith is implying that it is perfectly fine for the courts to order possession of any property, irrespective of the fact that the property is owed by someone completely unconnected with the purported debt. This sets a new precedent, according to Smith, enabling anyone, anywhere to obtain possession of someone else’s property for free, just by making an application for possession.

The corrupt UK courts will order possession, even in absence of a claim form that has been issued by the court and even if the property is owned by a third party!

They did precisely that in the Watson’s case. It was all predetermined from the start, to assist the bank in furtherance of their fraud whilst feeding their fellow racketeers, the corrupt lawyers at Eversheds Cardiff who also falsified the bankruptcy documents and the purported trustees who have been “feeding off the fraud” racking up hundreds of thousands of pounds (proceeds of crime) in the process.

When we reported the crimes to Cardiff Police, they were very quick to dispose of it without investigation, the following morning in fact!

The UK’s inter-agency collusion and systemic corruption ensures secrecy throughout, so that all regulatory and law enforcement authorities ensure that they conceal and that any hope of getting justice is vehemently denied.

At the bottom of page 2 and on to page 3 of his order, Smith “ratified the fraud” to assist the fraudsters:

There is no basis to suggest that the judgment against Mrs and Mrs Watson in the Possession Claim, including specifically the judgment debt that led to the making of the bankruptcy orders against them, is anything other than regular and proper”

A procedural nullity: The CPR Part 55 possession claim was never even issued or served

That mattered not to Mr Justice Marcus Smith, his job is to defraud, the law matters not.

In the application that Smith evaded, we assisted the Watsons by drawing the Court’s attention to the fact that firstly the property is not owned by Mr and Mrs Watson, and secondly the originating claim form is a procedural nullity. The claim form purported to be a possession claim pursuant to CPR Part 55, part of the Civil Procedure Rules that governs the legal processes for property possession claims.

CPR Part 55(b) cites that: “the standard period between the issue of the claim form and the hearing will be not more than 8 weeks”

The purported possession hearing did not commence until 6 years, 7-months and 26-days after the date on the claim form (beyond the statute of limitations).

CPR Part 55(c) cites that the defendant must be served with the claim form not less than 21 days before the hearing. The claim form was not served, predominantly, because the claim never even began in law, due to the non-compliance with Civil Procedure Rule Part 55. In absence of issuance and service of the claim form, it is ultra vires (beyond one’s powers) for any judge to have made any order in the case. That mattered not to Smith, he has been working for the offenders.

The purported bankruptcy orders are founded by the ultra vires, without jurisdiction act by the judicial office holder off the back of the claim form which is a procedural nullity. Aside from that, the property is not even owned by the alleged debtor. Smith describes it all as “regular and proper”.

A comparative example of what Mr Justice Smith is condoning

The comparative would be for person A to sell his property to person B. Then, 7-years after the sale, the Court orders possession of the property, owned by person B, (in absence of service of any claim) for an alleged debt that was owed by person A that predated person B’s ownership of the property.

Smith is saying that doing so is all “regular and proper” knowing that it is wholly irregular and improper. The man is a liar and a cheat and the same is proven beyond reasonable doubt. This is what utter insanity, lawlessness and abuse is being perpetrated in the UK’s courts.

Smith knew, only too well that the purported bankruptcy orders were made only to conceal the fraud and to prevent justice being served on the Bank by taking away Mr and Mrs Watson’s legal standing to bring a claim. Smith also knew that the bankruptcy orders, founded by the void possession order, are void ab initio, but even that didn’t stop him.

He certified the Watson’s application to set aside the void orders as “totally without merit” and created an ECRO to further conceal the criminal property the Watsons have been defrauded of.

Aside from the most obvious issues that nullify the purproted bankruptcy orders, Mr Justice Marcus Smith entirely evaded his duty to do what the application sought to have done, knowing that it is not res judicata to set aside any debt or to inquire into the validity of a debt in the Insolvency Court whenever a prima facie case is made out from which to have impugned the judgment or order. Smith fettered the jurisdiction, concealing criminal property and depriving the Watson’s of their right of access to a fair and unbiased trial.

We have invited Mr Justice Marcus Smith to comment on this article and to explain to us why he is still in office after breaching his oath. We will report on his response (if any) in the next article.

Our page; the Insolvency Court’s Duty of Inquiry, sets out long established authorities, providing invaluable knowledge for anyone facing insolvency proceedings, whether corporate or personal, where there are grounds from which to dispute a debt, even if the debt is founded by a judgment.

Your donations mean that we can help people who have been trapped by the rotten system and bankrupted like the Watsons were, where they wouldn’t otherwise be able to afford justice. We provide our services to people who have faced such misfortune free of charge, courtesy of your donations that enable us to do so.

Lord Justice Nugee defrauding in the name of justice