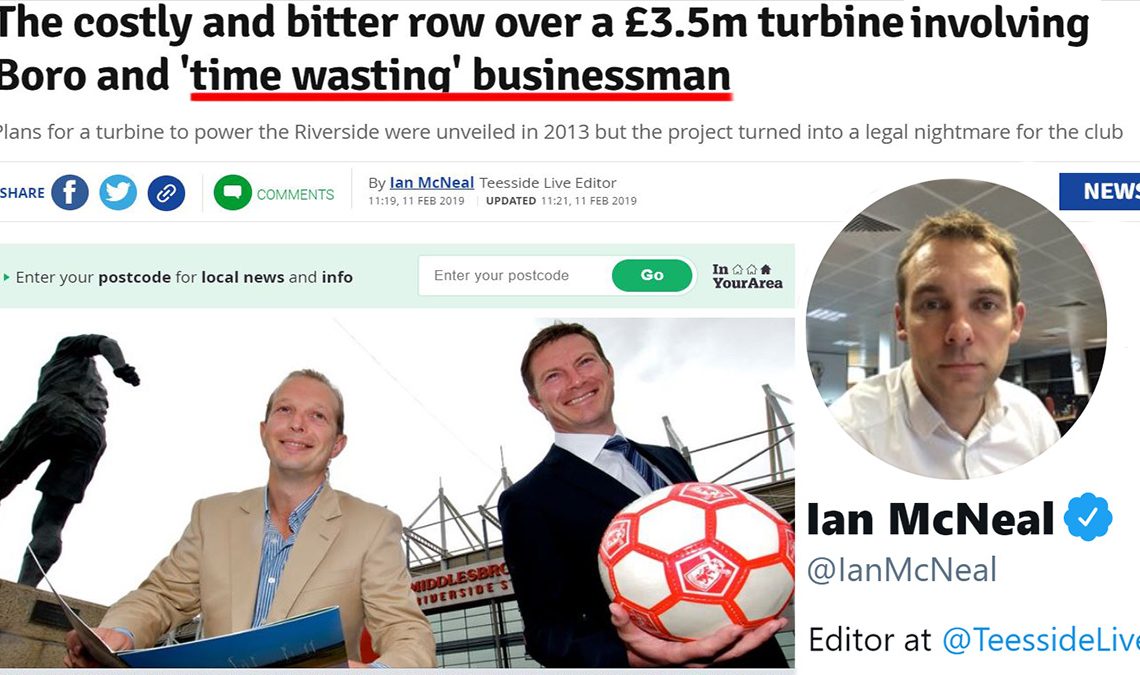 The libelous and largely inaccurate news feature caused serious harm to our CEO’s business reputation for over 2-years and 3-months. The article was published on 11th February 2019. They kept very quiet about the fact the Club had been using a £4.1 million claim to keep the asset beyond reach of creditors. They wilfully failed to reach out for the correct facts.

What was to be “Europe’s first wind powered football stadium” ended in tatters when Middlesbrough FC took £200,000 from our CEO for a Lease to “construct, connect to the grid and operate” the turbine. The Club made a ransom demand for circa £256k and when he didn’t pay, because no money was owed, they “U-turned”, “threw their toys out of the pram” and refused the connection “at the heart of the project”.

How is our CEO a “timewasting businessman” we ask? Nobody, with the best will in the world, could operate a turbine with no connection.

A turbine with no connection is as much use as a chocolate fireguard but the third party influenced media and the fake judges work for them anyway.

Logic, truth and reality is far departed in the UK, the economic crime and cronyism corruption epicentre of the world. The tabloid was concealing the Club’s frauds and the court did the same.

The “trial by media” was set up by the fake news publisher to defame and discredit our CEO to assist Middlesbrough FC in concealment of their frauds whilst portraying an entirely inaccurate position to dupe their readers into belief that their local Club, Middlesbrough FC were the innocent parties. A far cry away from reality.

After throwing away £770,000 of our CEO’s money on developing the project, then refusing the connection, rendering the project entirely useless, the Club’s fake news publisher came to the rescue to ratify their lies and fraud in the public domain.

We contacted Reach PLC’s legal department over a year ago and showed them the correct factual position, even presenting a court order demonstrating that Middlesbrough FC’s claims are fraudulent and that they unlawfully forfeited the Lease. They ignored the truth, knowing that their article was false, they just kept it there.

After months of trying to reason with the unreachable, Reach PLC and the idiot that produced the fake news article, Ian McNeal, an avid Middlesbrough FC supporter, we announce litigation against him and the publisher in the USA, far enough away from the controlled corrupt UK courts.

McNeal lied and cited in the article that Mr Millinder was invited to comment, knowing that he never was.

Who can operate a wind turbine with no grid connection?

The libelous allegation that our CEO is a “timewasting businessman” roots in the fact Middlesbrough FC “U-turned” and refused the connection they themselves had jointly negotiated and agreed with Mr Millinder, during the option period.

The entire purpose of an option agreement is just that, it gives an option for either of the parties, if they became aggrieved with either the technical or commercial terms being proposed, to negate without financial commitment.

That didn’t happen, Mr Bloom, the former senior partner of the aptly named “Womble” Bond Dickinson, extended the option agreement for the specific purpose of securing that same and only grid connection for the wind turbine.

On 19th November 2012, the Club’s express obligation was stipulated by Northern Powergrid. the Distribution Network Operator who own the electricity grid:

“The 1.5MVA turbine can be connected locally to the existing supply stadium. The connection arrangement will be similar to that discussed earlier with the two existing substations being disconnected from our system and transferred to the clubs ownership and a new single HV point of supply established”.

The grid connection for the wind turbine

Middlesbrough FC were to adopt and take ownership of the red and blue parts to form a private 11Kv network that the turbine would connect into. Empowering Wind MFC Ltd, Mr Millinder’s wind turbine sole purpose vehicle was to own the wind turbine substation and the infrastructure in green.

When it came to implementing the connection, nearly two years after the Club and Brown had completed the extension to the option agreement and, later, the Lease on the basis of the same and only connection for the wind turbine, both Bloom of the Club, the former senior partner of Womble Bond Dickinson, (then Dickinson Dees) who went on to become Gibson’s right hand man, and Brown himself, “U-turned” on the connection:

Brown and the Club knew that the only alternative configuration could not export (meaning that the power could not be sent back to the grid) and costed over £1.3 million to make. Brown and MFC also knew that the connection specified by Northern Powergrid that they agreed during the option period was the only connection for the wind turbine.

Below it is evidenced that Bloom himself was clearly well aware that the alternative connection that was never an option. He quoted the exact passage in his own email:

Above, Bloom was responding to the email from Mr Millinder’s technical advisors and the DNO below when the connection configuration was first specified:

The Club and their cohorts, the aptly named “Womble” Bond Dickinson solicitors enticed Mr Millinder to complete the Lease and pay them £200,000 on the basis of that connection with no intention of ever providing it. A clear fraudulent representation in its own right, notwithstanding their fraudulent claims that came later when they used insolvency to defraud Mr Millinder of the damages claim and the money invested.

Brown was paid by Mr Millinder to negotiate and complete the contracts with the Club, they knew all along of the terms of those contracts and the grid connection requirement, but they rode roughshod over them, later relying on the 3rd party influenced corrupt judiciary to prevent justice being served on them.

The fake news article: The costly and bitter row over a £3.5m turbine involving Boro and ‘time wasting’ businessman describes that “Plans for a turbine to power the Riverside were unveiled in 2013 but the project turned into a legal nightmare for the club“, making no mention of the reason why, because the Club refused the connection.

The article was fabricated off the back of the fact that Sir Geoffrey Vos, the corrupt purported judge, perverted the course of justice to prevent justice being served on the fraudster football club. Another case of political interference with the judiciary to provide impunity to the establishment and their affiliates.

The article harped on about only one of the claims made by the Club, but deliberately failed to disclose 3 claims, all of which are fraudulent, with the first being £256,269.89, the second being £541,308.89 and the 3rd being for over £4.1 million sought for £75k of rent that was never owed and pursuant to the conditional Energy Supply Agreement for energy they prevented energy from being supplied.

“…it was, in effect, all Middlesbrough’s fault for failing to enter into an agreement called the connection agreement. The upshot of that was that EW was unable to generate any
money, that meant it was neither able to pay rent under the lease, nor to pay what were quite substantial charges ostensibly payable under something called the energy
supply agreement under which, if it was not supplying energy to Middlesbrough it had to pay Middlesbrough a figure based on eight pence for each kilowatt hour of
energy which Middlesbrough consumed

On the basis of those matters, Middlesbrough demanded payment of money from EW, terminated the lease for non payment of rent and subsequently appeared as a
supporting creditor in support of a petition to wind up EW “

Again however, the corrupt judge was concealing the true factual circumstances, knowing that Staunton, the Club’s own counsel had admitted on 9th January 2017 that “For the purpose of the Energy Supply Agreement, Force Majeure has effect”, but altogether evading the fact that the ESA is conditional upon Mr Millinder’s “full satisfaction of” entering into the “Connection Agreement”, the same connection agreement that the Club refused.

Even if the Club did not refuse the connection, they still unlawfully forfeited the Lease, for when they did so, on 18th August 2015, the first installment of rent (£15k) was not payable until 15th September 2015.

The delinquent Gazette Live publisher failed to make any mention whatsoever of the £541,308.89 or the c£4.1 million claims, because they undoubtedly knew the claims were fraudulent, just as the court did. All peas of the same pod.

It hardly takes a rocket scientist to establish that Middlesbrough FC’s own counsel admitted no claims could be established owing to “Force Majeure” having effect,. 24-days after their counsel admitted the claims are false, Gill of Womble Bond Dickinson claimed over £4 million from the conditional ESA. It is complete lunacy.

We have invited the Gazette Live, Ian McNeal, its parent, Reach PLC and the Club to comment on this article and the £4.1 million fraudulent claim they were concealing. We will publish their comments in the next article.

Worth reading...
Judicial independence is compromised and the leadership are to blame