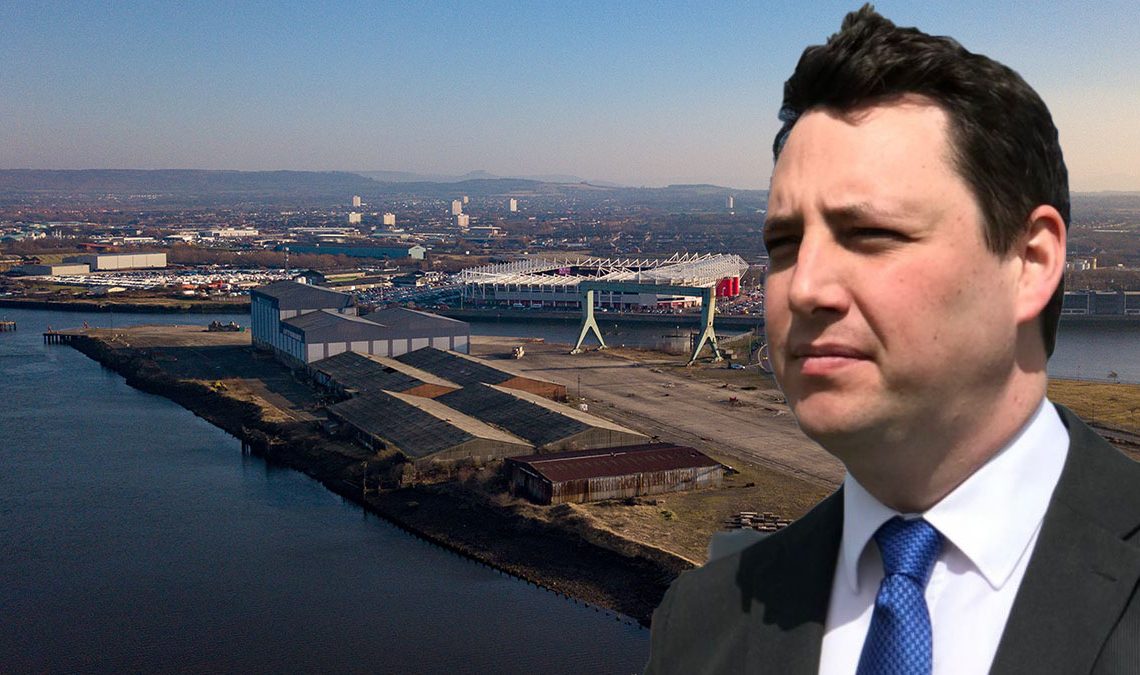 Bringing public money together with acquisition of private land and infrastructure with unscrupulous leadership is a surefire recipe for corruption, and this one has all the right ingredients, including track record. Steve Gibson, the immoral proven corrupt fraudster former Labour MP who “turned coat” when Conservatives took over the long term Labour stronghold, combined with Ben Houchen, the green around the gills lawyer Mayor with the Conservative backing of Boris Johnson, the South Tees Development Corporation has it all.

A mirror model of the last asset stripping Teesside quango

Founded in 1987, the Teesside Development Corporation (“TDC”) was the largest government-backed development corporation in the UK, covering 12,000 acres land. The quango was established to fund and manage regeneration projects in and around the Teesside area, receiving government grants of £354 million. It developed a number of schemes, including housing, industrial and leisure complexes on former industrial land in Hartlepool, with it’s flagship developments including the Hartlepool Marina, Teesside Retail Park, Tees Barrage and Teesdale Business Park. Approximately £1.1 billion of private finance was leveraged into the scheme, which, in its own right would have been more than enough to have completed all the development projects it engaged in.

Following the 2002 National Audit Office investigation TDC was found to have made commitments to four development schemes, totalling some £34 million, outside its delegated authority and without prior approval from the Department. On 20th March 1998, at its last meeting before the winding-up, the TDC Board approved payments of £5.1 million also without knowledge of the Department, with the Chief Executive also granting a £500,000 mortgage to a developer that was prohibited by the Urban Development Guidebook. That developer subsequently went into administration without repaying the mortgage.

The quango was the driving force behind Steve Gibson’s Middlesbrough FC Riverside Stadium’s development, first offering the Middlehaven site to the Club and then overseeing its construction.

The Stadium is privately owned by Steve Gibson’s company, so what was the Corporation doing funding it in the first instance we ask?

In April 1995, the contractor completed the sub-structure works for the new stadium for Middlesbrough Football Club. The value of the works was £1.1 million. Although work was certified as complete by that date, the Corporation did not pay the contractor. The Corporation subsequently invited the contractor to enter into an
agreement with British Linen Bank whereby the Bank paid the outstanding sum at a discounted rate around December 1996. Price Waterhouse referred to the deferred payment in their 1997 Management Letter to the Department and the Corporation’s Board.

The Stadium is privately owned by Steve Gibson’s company, so what was the TDC doing funding it in the first instance we ask? They have been using public money for their own private gain.

In July 1997, the Corporation notified the Department that it had granted to Middlesbrough Football and Athletic Club a 999-year lease on the 8.9 hectare-site of its new BT Cellnet Riverside Stadium, at a peppercorn rent of £1.

The District Valuer later valued the long term leasehold, based on the site having been fully reclaimed and with infrastructure in place, at in the region of £1 million.

The quango funded £8 million of reclamation, decontamination and infrastructure work at the Riverside Stadium site then gave it away for £1 without the Department’s approval

The National Audit Office found that: “The Corporation’s chartered surveyors valued the site at £1 in May 1997, based on the Corporation’s instructions to value the site as contaminated, un-reclaimed and only partly serviced, requiring £8 million of reclamation, decontamination and infrastructure work. By then, however, the reclamation and infrastructure work had already been completed, funded by the Corporation, and the Stadium had been open since 1995. The Department had not been consulted on the terms of the deal, nor asked to give its approval”.

£1 million for £1 including £8 million work at public expense, nice work if you can get it. Cronyism pays.

In 2002 the TDC quango was branded “a total disgrace“, with Labour MPs Frank Cook and Ashok Kumar demanding action be taken against the officials in charge after it ran up over £40 million in debt against the public purse.

The solicitors involved advised the quango which documents to shred

The solicitors involved were found to have advised the quango which documents to shred, thereafter becoming illusive upon collapse of the Corporation, shortly before it was wound up in 1998.

Covering 4,500 acres, the new quango is chaired by the Conservative Tees Valley Mayor, Ben Houchen, with his right hand man board member being Steve Gibson OBE, bringing the track record of pilfering public money in his own private enterprise from the previous quango. We contacted Mr Houchen in 2020 to inform him of Steve Gibson’s antics also deploying corrupt lawyers to defraud our CEO, Mr Millinder of over £10 million in revenue from what was to be “Europe’s First Wind Powered Football Stadium” at the Riverside Site. Gibson retained £200,000 paid to the Club by Mr Millinder for a Lease to construct and operate the wind turbine after they refused the connection, preventing him from constructing and operating the turbine.

We made Houchen, a lawyer, aware that Gibson, his fellow STDC Board Member, had been engaging in dishonest and fraudulent activities. Gibson had instructed the aptly named “Womble” Bond Dickinson, formerly Dickinson Dees, to make various fraudulent claims to stymie the liquidation he caused by refusing the connection for the wind turbine. A £4.1 million fraud was committed to suppress the legitimate claim against Middlesbrough FC founded by their proven unlawful forfeiture of the wind turbine Lease, but the corrupt judiciary, acting under orders, let them get away scot free.

They were using the façade of the insolvency they caused, to defraud and the corrupt Conservative BEIS ministers, in control the Insolvency Service, who also employ Womble Bond Dickinson have been supporting them in the cover-up.

Jeremy Robin Bloom, Gibson’s right hand man and former senior partner of Womble Bond Dickinson, was one of the lawyers advising the former Teesside Development Corporation. Bloom now resides at Middlesbrough FC as general legal counsel. It Bloom, acting under instruction, who orchestrated the fraudulent claims in insolvency proceedings after defrauding Mr Millinder of his right to construct and operate the turbine.

We showed Houchen the admission from Ulick Staunton, the barrister acting for the Club where he stated in writing that “Force Majeure has effect” on 9th January 2017. Staunton had admitted in Court and in writing that no claims could be established, yet, just 24-days prior to Gill, a senior partner of Womble Bond Dickinson claimed over £4.1 million of which £4 million was sought pursuant to the conditional Energy Supply Agreement after they refused the connection, preventing energy being supplied.

It was not until 12th November 2018 that Ulick “U-turned” on the claims he admitted were false 22-months and 3-days prior, not before racking up over £45,000 in costs against Mr Millinder founded by their collusion and fraud.

Houchen, who owes a duty in the public interest to act with integrity according to the 7-principles of public life, covered it all up and remained completely silent on the matters. Hardly acting with “honesty” or “openness”.

We showed Houchen an admission from Claire Drummond , internal audit supervisor of Womble Bond Dickinson, evidencing that Gibson was well aware of the issues.

Gibson did nothing but conceal, wholly reliant on Hannon, the corrupt Official Receiver of London sustaining the claim to defraud the Empowering Wind MFC creditors.

“Further to your email dated 30 June 2017, Mr Gibson is aware of your correspondence but will not be responding to you directly.

Please ensure that all correspondence in relation to this matter comes directly to me”.

Under the control of the corrupt Conservative Lord Chancellor, who attended Hatfield Durham law school with Bloom, he saw to it that Middlesbrough FC and their conspirers were provided impunity when Mr Millinder sought justice for the outright fraud and wrongdoings. In over 25 hearings, the corrupt UK judiciary covered up what is the most simple and proven case. Even when Mr Justice Nugee found that Middlesbrough FC had unlawfully forfeited the Lease and that the claims were false, the corruptors deployed a civil restraint order against Mr Millinder to ensure secrecy and concealment of their frauds.

A case of “justice subject to status”, not what you know, but who you are connected with. The controlled local Middlesbrough newspaper defamed Mr Millinder in their factually inaccurate article, branding him a “timewasting businessman“. The clear and obvious contention is, who can operate a wind turbine when the Club refused the connection?

The Club and their fellow corruptors are the true timewasters. Aside from being entirely corrupt and immoral, may be the Teesside chemical plant emissions detrimentally affected their cognitive processes.

We invited Houchen, Gibson, the South Tees Development Corporation, the Lord Chancellor and the Teesside Gazette Live for comment on this article.

Worth reading...
Robert Buckland QC MP – UK justice Minister says it’s ok for the Government to break the law
error: Alert: All our content is protected - You are prohibited from copying !