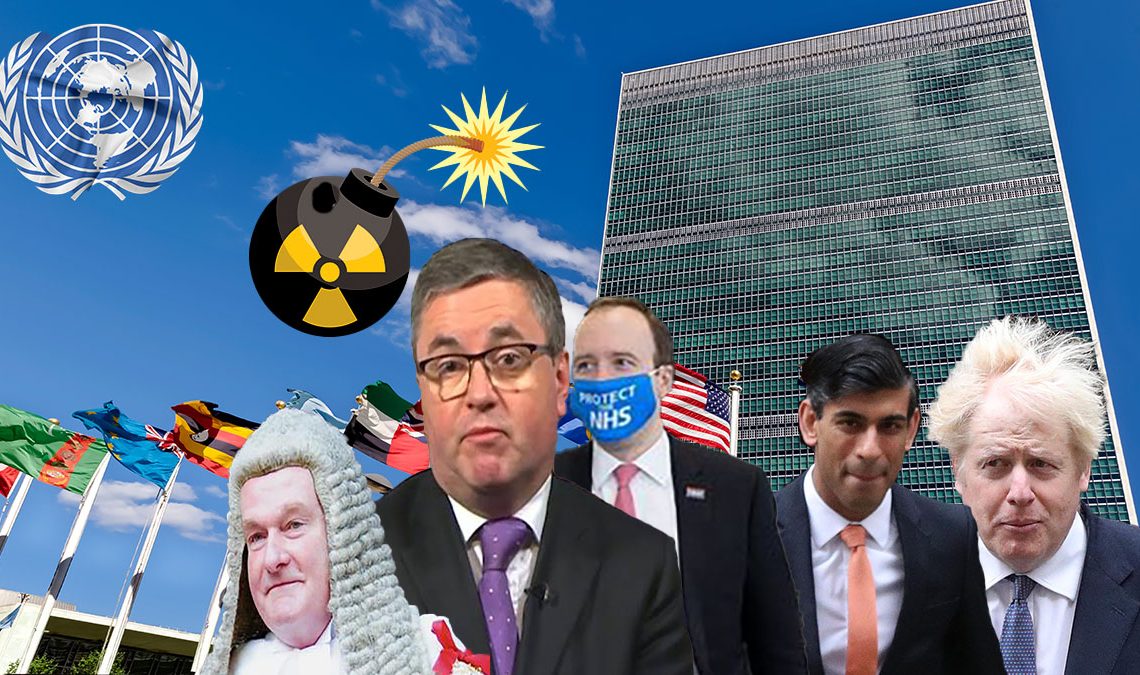 Intelligence UK and its international partners announce our petition for sanctions and a U.N ruling against the corrupt Conservative establishment responsible for gross human rights violations in contravention of The Universal Declaration of Human Rights.    We are petitioning the U.N and member states pursuant to the European Magnitsky Act to freeze assets and impose travel bans on the perpetrators. Our initiative combines with US led litigation against the corrupt judiciary and heads of state responsible for injustice.

The United Nations General Assembly Special Session against Corruption (“UNGASS”) is an important high-level meeting. One of its central components will be a concise and action-oriented political declaration, specifying reforms and actions to which governments can be held accountable. The assembly commences in June 2021.

The UK Government pretend to be “whiter than white” when, they are in fact darker than dark. The establishment has been expert in concealing the true extent of the corruption inflicted upon many thousands of innocent victims under the façade of justice and the law.  Grand corruption and inter-agency collusion prevails throughout the justice system, police and regulatory authorities, led by politicians at the highest echelons.

It is requested that a motion is filed at the Special session of the General Assembly against corruption calling for a UN led independent assessment of the evidence of corruption in the UK and the regulatory failures which are enabling global corruption.  Such action will shine a light on the extent of the corruption in the UK which has a massive global effect.  Same would then be reported by global media (outside of the influence and control of the UK media)

The UK’s Courts have been weaponised into places of gross human rights abuse, fraud and asset stripping:

Public integrity is essential for advancing the public good and ensuring the legitimacy of public organisations. It is also considered an antithesis to corruption, as recognised by articles 7 and 8 of the United Nations Convention against Corruption (UNCAC).

It is of paramount importance in the public interest that the rule of law is maintained and that means “an independent justice system, free from interference from outside, free from corruption, free from influence, that is respected and treated as independent by those in Government and those in Parliament, and that ultimately, the public has confidence in the ability of the courts and the responsibility of the courts to take decisions according to their best judgment about what the law of the land requires.

All ministers are required, under section 3(1) of the Constitutional Reform Act to “uphold the continued independence of the judiciary.” The Lord Chancellor has an additional duty, expressed in the oath of office, to “defend” that independence. This defence includes preventing undue Government influence on judicial decisions (including undue ministerial criticism of judicial decisions), ensuring adequate resources for the judiciary to exercise their functions and having regard to the public interest. The UK ministers have wilfully failed in their duty to do so.

The rogue State, under control of the corrupt Lord Chancellor, Robert Buckland QC MP, the Lord Chief Justice and the Law Ministers, Michael Ellis QC MP and the Solicitor General have breached their constitutional oaths, their have all failed to ensure that the rule of law and impartiality of justice is maintained.

The doctrine of wilful blindness & spoliation of evidence

Whilst we have made all of the ministers aware of the corruption of the justice system by third party political interference, they have “turned a blind eye”. They, as do the corruptors at the helm of the justice system have knowledge and their suspicion is aroused to the point where they see the need for further inquiries, but they all deliberately choose not to make those inquiries. Spoliation of evidence prevails in the courts, being the intentional, reckless, or negligent withholding, hiding, altering, fabricating, or destroying of evidence in a proceeding. The judges themselves are behaving in this way, acting with actual bias to prejudice civilian’s rights to a fair trial on a wholesale basis The corrupt judiciary favour the “magic circle law firms”, insolvency practitioners and corporations over law and the principles of natural justice.

The right to remedy for victims of gross human rights violations

In the UK, justice and remedy is being denied on a wholesale basis, the right to a fair trial does not exist for thousands of victims of this abuse.

(b) Investigate violations effectively, promptly, thoroughly and impartially and, where appropriate, take action against those allegedly responsible in accordance with domestic and international law.

The UK State has deliberately failed in its obligations. Additionally, the human rights abuse inflicted upon civilians involves supererogatory and protracted oppressive acts by the State in relation to unconstitutional corona lockdowns and fines, keeping UK civilians prisoner in their own homes, preventing civilians from their right to freedom of movement and depriving innocent parties of the right to earn a living, causing severe and emotional financial distress.

This is all happening whilst the kleptocracy profiteer, using the global pandemic as another revenue generating exercise for their cronies, awarding multi-million pound PPE (personal protective equipment) and test and trace contracts to their associates, with no competitive tender process whatsoever and whilst the Chancellor of the Treasury, Sunak and other members of the Conservative cabal make huge gains, forcing the vaccine on millions due to their gross government mismanagement and inability to curb the spread like other countries have.

It is time for us the people the 99% to unite and take action to remove the 1% from power, in the interests of justice, for the good of our country and our future generations.

Please help us to help you, spread the message, share and far and wide across social media.

Worth reading...
Middlesbrough FC – Europe’s first wind powered football stadium – A conspiracy to defraud concealed by the corrupt establishment
error: Alert: All our content is protected - You are prohibited from copying !