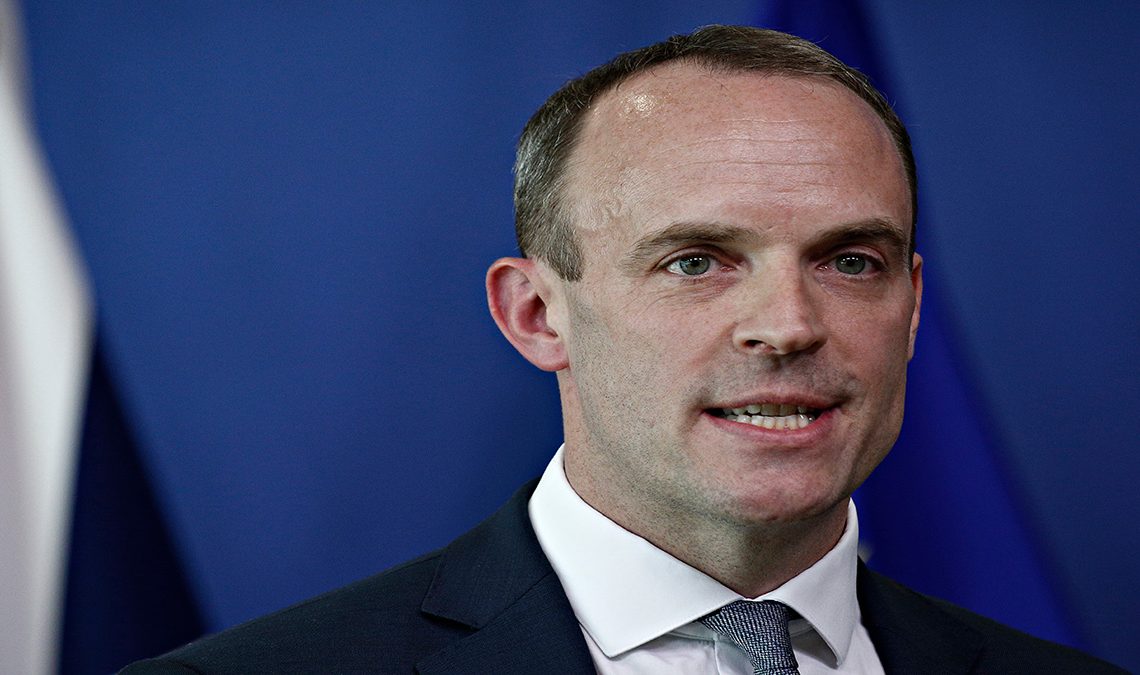 Dominic Raab, the Tory Lord Chancellor and Minister for Justice in the UK is a quisling. A quisling, for those not familiar with the definition, is a traitor who collaborates with an enemy force occupying their country.

The Tory kleptocracy is that enemy force, enemies of the people who have violated the rule of law and decimated long established British constitutional principles that underpin what used to be a democratic state. They are stripping away the rights of the people whilst providing themselves and their affiliates with impunity.

Public integrity is essential for advancing the public good and ensuring the legitimacy of public organisations. It is also considered an antithesis to corruption, as recognised by
articles 7 and 8 of the United Nations Convention against Corruption (UNCAC). The Tory kleptocracy is the corruption, we, the people, should all be united against it, and them.

It is of paramount importance in the public interest that the rule of law is maintained and that means “an independent justice system, free from interference from outside,
free from corruption, free from influence, that is respected and treated as independent by those in Government and those in Parliament, and that ultimately, the public has
confidence in the ability of the courts and the responsibility of the courts to take decisions according to their best judgment about what the law of the land requires”.

Under this Tory kleptocracy, independence of the judiciary is non-existent. Nobody can rely on the courts to do justice, they have been weaponised into places of fraud, lawlessness, injustice and gross human rights abuse.

Even the corrupt freemason Lord Chief Justice, Ian Burnett of Maldon was forced to admit, in December last year, that there has been “unprecedented levels of political interference with courts“, referring to the Elphicke sex abuse trial where Tory politicians sought once again to coerce the judiciary, it’s what they do best.

At the same time, whilst everyone else was locked down, the Prime Minister and his cronies were partying together in Number 10, drinking and getting merry, whilst everyone else suffered. Raab has now come into the equation, to condone it. A true mark of his complete lack of integrity, Raab has proven himself to be a blithering idiot and a dishonest coward, heading up a corrupt, politically controlled judiciary of lying, lawless, cheating dishonest cowards.

Evidence of Raab’s disrespect for the law and dishonest concealment

In this short video interview, (body language tells all) Raab clearly demonstrates his willingness to affront the law, to make justice “subject to status” to condone the fact that all the police forces are corrupt and politically controlled, and that they no longer investigate crimes for the people, but instead, they have become, “soldiers to the kleptocracy”.

Raab was asked “This time last year, were Christmas parties allowed in London. He responded “generally no”. Raab is going around the houses, seeking to evade the statutory law that makes it a criminal offence for anyone to convene a party during the Coronavirus lockdowns in December 2020.

Raab is proven to have disrespected and degraded the rule of law he is sworn into office to respect. The actions of Raab demonstrate he, like his cohorts are unintegral liars and cheats who make justice “subject to status”. His own actions imply that the Tories are “above the law”.

Dominic Raab, the Lord Chancellor has breached his oath of office and has broken the law

Dominic Raab was sworn into office to defend the independence of the judiciary and to respect the rule of law. He has flagrantly violated his oath on both counts. Not three months into office, Raab vowed to amend the Human Rights Act 1998 to prevent the European Court of Human Rights having the final say in UK human rights cases.

Raab and his cohort, Burnett of Maldon, the Lord Chief Justice, know, by their own admission that there is a terrible issue of political interference with courts, yet under section 3 of the Constitutional Reform Act 2005, all Law Ministers (including the Prime Minister) are under a legal duty to “maintain the continued independence of the judiciary”, they have failed, they have all broken the law.

Section 6A of the Promissory Oaths Act 1868 is the constitutional oath of the Lord Chancellor;

“I, Dominic Rennie Raab, do swear that in the office of Lord High Chancellor of Great Britain I will respect the rule of law, defend the independence of the judiciary and discharge my duty to ensure the provision of resources for the efficient and effective support of the courts for which I am responsible. So help me God.”

A typical trait of systemic corruption, compliance is rewarded. They have been promoting judges who follow their orders, often perverting the course of justice to provide impunity to members of their cabal, or their affiliates.

Intelligence UK has incontrovertible evidence to prove that Raab and the Lord Chief Justice have been promoting judges courtesy of taxpayer’s funds, after knowing that those judges have breached their oaths. The classic example is the recent promotion of Myles Watkins, the corrupt family court judge of Bristol County Court.

After reading our complaint, with proven evidence that Watkins perverted the course of justice (acting with ill-will) ,providing impunity to a dishonest QC barrister and his fellow freemason, Raab promoted him to a Circuit Judge, although moving him from Bristol County Court. Judges that breach their oaths are not judges, why did Raab promote him?

The judicial oath is law designed to protect British civilians from tyranny by those occupying judicial office.

It is the primary duty of the Lord Chancellor and Lord Chief Justice to preserve the rule of law and to discipline judges who act in a way that vitiates their oath, they deliberately fail to do so. Instead, under this vile kleptocracy, judges who breach their oaths, often acting under orders of the Tory racketeering enterprise, are promoted, effectually bribed for following their orders, courtesy of public funds. They are unaccountable, and completely unregulated, a law unto themselves. Justice does not figure in their equation.

These unconstitutional, oath breaking Tory criminals have no respect for you, your rights or the law they are all sworn into office to uphold. They are in office solely for their own greed and to protect their systemically corrupt organisational structure from exposure and prosecution.

The Tory kleptocracy are self-regulating, controlling the courts, police and all the regulatory authorities, they are responsible directly for the deaths of over 200,000 civilians through their malfeasance, whilst inflicting degrading, oppressive human rights abuse on many thousands of others.

The people must act now, to stop this tyranny and abuse, for the good of our country and our future generations. Exposure is one of the cures.

Please do your bit and spread this article far and wide.

Worth reading...
Mr Justice Fancourt & Lord Justice Nugee trashed UK law
error: Alert: All our content is protected - You are prohibited from copying !